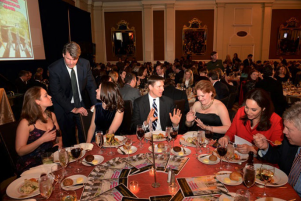 To see or to be seen…that is the question. This city is, ostensibly, about running the most powerful nation in the world, doling out tax dollars and greasing the wheels of justice. The subtext, though, is celebrity. Fame and immortality, being known beyond your small circle and short life…these things compel us to do many things.

During my first stint making unrequited passes at the WoB, I got a chance to go to the famed Radio & Television Correspondents’ Dinner. Well, not to the event itself, but to the “after parties” thrown by the media scrum that clings to the political celebrity culture like a lamprey to a shark. My “in” was a job at the “most respected hour of news” and I went with some younger news desk denizens. We got drunk.

Now, I’ve always been good with names and faces. Really good. With baseball players as a kid, punk and new wave bands as a teen and politicians and journalists ever since. Suitably sloshed and dressed up, a young Eastern Elite and I gamboled around from party to party. Fox News had a killer bar, BTW. They had Jack. I was seeing one named face after another. I was seeing them all. I wanted to be one of ’em.

As a tall, now completely unwatchable babbling head walked by I said, “Hello, Mr. O’Shut-up…you’ve inspired me to get into this business!”

“What did you just say?,” blurted out of the Elite’s gaping mouth. “C’mon, don’t starf’ck.”

Chastened and reprimanded, my soul poked a finger in my conscience’s eye. The Elite had taught me a lesson, perhaps the most important lesson on survival in the WoB. Funny, but I really didn’t even like the guy I’d just complimented. We were so far apart on so many levels. But when we were close, in the same physical area, I morphed into a socio-political sycophant. That’s the dynamic of celebrity and our mass-cultural delusion that they inherently mean something as people because they are known. Seeking meaning in our lives we become pretenders or admirers. I was a pretender. I wanted to be a pundit, a babbling head. I got caught up in the dynamic.

So I drank so more. It was fun.

So last night, faced with a bevy luminaries–from entertainment and politics–I was prepared. It was part of a story I’m doing, so I wasn’t on the A-List or B-List…just the see-list. Therefore, my participation was buffered by a semi-permeable layer of work. But I did see one beautiful, famous Irish lass, spoke quickly with a famous, funny musician and generally observed, from my chastened perspective, all the others who needed to be seen with those who are seen, and those who try to see them all. Countless people posed for paparazzi as if Andy Warhol was standing behind them with a stopwatch, timing them while they frantically tried to look hot and hip. Then came the schmoozing, lots of head nodding, lots of martinis and overdone make-up. Mostly, people waited for the big star of the night, a beautiful actress accompanied by her female family cohort, to arrive. They stood around like cattle waiting for the hay bail to drop off the back of the flatbed. They just wanted a chance, a small nibble at her ear. She blew right by them.

After all my experiences, all my sightings and conversations with the WoB’s various sorts of luminaries, I think my star-f’cking days are long gone. It’s more interesting now to watch other people make their passes and be turned down. Or to get there passes accepted…at a great price.

'Star Grazing' has no comments