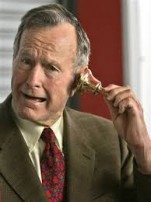 Plausible deniability. It’s the way things get done. Not the pedestrian policy matters that churn through the 24 hour news cycle. It’s the events, causes and decisions that make those policies necessary. The things that seem random, inexplicable and, usually, cause us to shake our heads.

Deniability is the grease our covert government uses to run smoothly. It drips from the Bush Family Machine.

Don’t do yourself what you can get someone else to do for you…someone two or more layers of personnel away from the actual decision maker. The CIA has run on plausible deniability since it’s inception. Revolutions started, leaders assassinated, movements undermined, “negative assets” developed…all using intermediaries. Indigenous agents, interlocutors, agents provocateur. These people, if caught, will not be able to trace the decision back up the food chain to the original source.

In Iran-Contra, the decision makers were barely protected by Ollie North. His gung ho persona was the firewall, the layer of plausible deniabilty, that protected Reagan and Bush. It was sloppy, but Semper Fi-do lept in front of the bullet. What a good little doggy. He got his bone…a senate run and media career on Fox. Reagan and Bush could deny, though, with some plausibility because Ollie was a freelancing right-wingnut, right?

Poppy almost got smacked by Manuel Noreiga. His “there was no quid pro quo” song played on repeat until he could use the military to go in, capture that troublesome asset and lock him away in a Miami jail. Poppy had visited Pineapple Face–as his fellow Panamanians called him–just as our little dictator claimed he had. No layer between the two men. No plausible deniability…plenty of denials, but not plausible.

The deniability game works much like a revolutionary cell. Three people are thrown together by three other people. Each of the three only knows their initial contact and the two other members of the cell. If one or more members of the cell is compromised, the rest of the cell structure is protected. Others can deny they are revolutionaries because the three in the compromised cell can only give away those they know…not the whole organization. The “orders” come from the central cell and are transmitted throughout the structure. The leader is protected.

Intermediaries make it possible to do so many things. Propaganda and true believers are even better. They’ll do things they don’t realize are contrary to their self-interest….they probably don’t know the true objectives…they are tools, or pawns…whatever.

That’s why Plamegate is so strange. After months and months of denials, of W’s admonitions about getting the leaker and now the uncovering of the sources–Rove and Cheney’s right-hand man Libby–it looks like they didn’t do a good job of building in plausibility deniability. Judith Miller’s odd path to testimony smacks of a cell in collapse, but without the labyrinthine layers of deniability to keep the Prez and the Veep from being caught up in the backlash. It was, by nature, conspiratorial. Maybe Bush didn’t know…maybe. But Cheney? The guy who went to the CIA to bully analysts into concocting evidence against Iraq? The hardass who many think of as the real president? Could Libby have coordinated with Rove without Cheney knowing?

So, now we have four guys sitting around a table, a still-smoking gun sitting there. We know who fired it. Do we know who ordered it?

Like Poppy in the Eighties, the arrogance breed by success…of getting away with one crime, one game after another…made them sloppy. Their denials are implausible. The only question left is whether or not anyone has the guts displayed by asset-gone-wrong Noreiga. Miller didn’t want to give up her info. Was it more than Libby’s words she hid away in jail? Did she talk to Cheney? She’s been a shill for them since Gulf War I. Who else was she protecting?

The cell has been compromised. But who gave the order?

'Implausible Deniability' has no comments