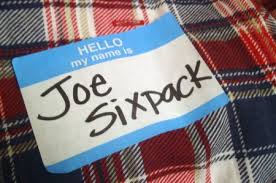 Joe Six-Pack. Do you know him? Are you that mythic American man? If so, keep in mind that you know or happen to be the quintessential demographic editors, reporters and executives design TV news for. What an honor, right?

Joe Six-Pack sits in every editorial meeting, a ghostly apparition of mediocrity, limited education and thoughtlessness. We decry our nation’s limited attention span and under-education. We think news is woefully incomplete, prurient and repetitive. We must blame Joe Six-Pack.

The argument made, most often by conservatives, about media elites holds water.

It comes couched in the ideology of anti-Liberalism, but the truth is less clearly defined on the political spectrum. This one populist appeal among a broadly elitist conservative agenda lacks context. The elites that I’ve encountered here in the WoB, particularly during my first stint, actually lack much of the ideological drive that many say they do. Really, they are much like the elites on the Right…concerned with money, power, influence, weekends in Aspen, on Nantucket or at the Hamptons and their kids’ high-priced educations. At the top, the two sides of the ideological spectrum bend and come together…making it more like a top vs. bottom divide than a left vs. right divide.

Their kids go to the same private schools, the same elite universities. They go to the same dinner parties, cocktail parties, charity fundraisers, opera performances and symphony concerts. They are invested in Wall Street, work in the same lobbying firms. And in the media, the upper tier of decision-makers are essentially bottom-line thinkers, worried about their careers, their incomes and what the corporations who own it all think about their ability to appease Joe Six-Pack, to hold his limited attention. Their charge is to sell commercial time while Joe’s engrossed in the rapid-fire nonsense that bridges one consumer appeal after another.

The upper echelon of economic conservatives realized a few decades ago that religious conservatives could run a populist image in front of the socially liberal, economically-obsessed Eastern Establishment. Many have tried to understand the merger of these two, seemingly disparate forces. It’s symbiotic. Sort of.

We see with Harriet Miers that religious conservatives remain uneasy. Since the end of Reagan-Bush, they’ve been organizing to control the GOP and force them to keep the faith. But the money is where the real power is. The party’s main successes have been financial, not cultural. Deregulation, particularly of the media in 1996, supersedes cultural policies. Think corporate bailouts, tax favors, budgetary pork. The agenda mouthed to religious Six-Packers keeps them on board while William Champagne loots the treasury, drains pension funds and builds tax shelters.

There are occasional victories for religious types. Gay marriage bans, Darwin bans, abstinence programs. These things don’t reach to the top, though.

The “Liberal Elite Media” remains their most effective bit of populism. It caused people to question all that they hear, read and see. It conditioned people to tune out everything. If the media does report something of value, it can be up-ended as political. But, more and more, it doesn’t really matter. News is passe…Joe likes infotainment. And why not, it’s been decided that he can ‘t understand information.

For those at the top, be they Repub or Dem, they know they’ll always be able to afford abortions, to buy the social freedoms they want, to get the educations they want and get the information they want. Elites read the Wall Street Journal. Evolution may fade in the public schools, but not at Andover or Sidwell Friends. Joe Six-Pack can’t really understand it anyway.

The most important part of the elite agenda is business. News is business. Edward R. Murrow’s “news as public service” is long gone. Corporate influence, country-clubbism and Ivy-Leaguers…that’s the context for the media elite. It becomes a disdain for the everyman, a sense of intellectual paternalism and feeling of superiority. We tell them what they can understand.

The producer I work with has done TV for decades. He’s heard it a dozen times…”We make television for Joe Six-Pack.” It makes his skin crawl. We both heard it again. “We need to make this understandable to Joe Six-Pack,” and “We need to tell them what we are going to tell them, tell them and then tell them what we just told them.” With time limited in any broadcast, imagine how little you can tell Joe Six-Pack if you have to repeat everything three times. It’s not that the media is dominated by liberals. It’s dominated by snobs.

And if Joe Six-Pack does expect a diet of short bites, empty calories and tasteless rumours, it’s probably because he’s been conditioned to expect it. There was a time, not too long ago, that Murrows and Cronkites gave us news. When news divisions were expected to lose money. Something changed. Bigger and bigger corporations took over. The elitism that comes with money took over the media. People who don’t know Joe Six-Pack as anything more than a cabbie, a construction worker or gardener decided to give Joe what they think he can handle. And what he can handle is what he wants. Certainly not the complex truths that cause his standard of living to decline year after year.

At least his beer is still cheap. Just wait for the next commercial, Joe…this Bud’s for you.

'Media Elitism' has no comments