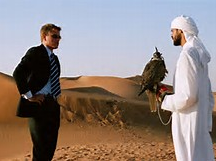 The denizens here in the Whore of Babylon came out in droves to see Clooney’s latest shot across our collective bow…Syriana.

Although I didn’t see anything there that hadn’t been known before, I suspect that audiences here in this denial-driven city came away frantically dismissive or quietly disturbed. Syriana doesn’t go far enough, to my mind, in showing the CIA-Saudi-Pakistan triad’s role in what we call “Al Qaeda,” or broadly refer to as “the evildoers.”

But it does show the role of petro-politics, of gaming markets and assassination, of the real source of decision-making in this country and our government. It shows quite accurately why we find ourselves in the mess in Iraq.

It shows us that chaos on the Middle East is good for business.

Clooney’s got that kinda clout and money and, thus, the platform to do what those few of us who actually work in the news media and have done the research on the triad behind Al Qaeda, on the history of US involvement in the region…who have actually followed the money over the last three decades…only dream of doing. Syriana bursts the news bubble we live in here in the US.

It’s tempting to pile on fact after fact, to take the case the movie makes and expand the database, buttress the premise with information.. available to those willing to look and stop averting their eyes…and to drive home the glaringly obvious connection between our governing family, the Saudis, the Persian Gulf, the CIA, petrobanking, and on and on.

I will not. I’ve tried over and over tell those who should be receptive, but can’t accept that things happen for a reason. Here in the WoB, it’s a particularly hard sell…everyone is so invested in this place and they cling to the platitudes of democracy and patriotism and the self-importance it implies. Or they just don’t want to embrace the fundamental truth that our system is itself a propaganda machine, one rolling PsyOp that keeps us quibbling over left versus right, sighing at “incompetence,” and lamenting the stupidity of others while the powers that be do those things we think unthinkable. Some just don’t want to lose hope.

Hopefully, a few Congressional staffers, a smattering of low-level lobbyists, a handful of bureaucrats and one or two cowered journalists will see this film and think. Just think for one moment about CIA fun and games, the covert nature of our system and the money and power that propels it.

The most dangerous words in a democracy are: “They wouldn’t do that.”

Well, they do…have done and will continue to do so as long as we collective refuse to come out of denial and accept the reality of lying, our well-documented history of covert policy and our blatant use of murder and military power to enrich the elite collective who care little for Americans…for anyone but their own, in fact.

The rest of the world knows and has known this for half a century. In Latin America, the Middle East, parts of Africa and in Southeast Asia. Many Europeans and Canadians know. Watch Syriana and decide if you are willing to know…and to find out more. Because there is more. And it ain’t pretty.

The Deep State Of Denial About Trump’s Oily Presidency

'Syriana…More than a Movie' has no comments