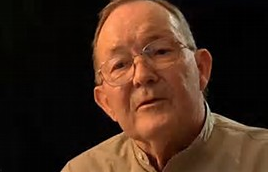 Blowback. When an action, policy or strategy causes unintended, unforeseen and unwelcomed consequences. Chalmers Johnson, historian and policy analyst extraordinaire, literally wrote the book on it. Titled “Blowback, Johnson writes convincingly about the consequences of our de facto, world-spanning empire, our history of covert fun and games and the hatred, resentment and complications those hijinx have caused. Well, also that it will cause…because he was ahead of the curve when he published “Blowback” in 2000.

Now the Bush Administration, the source of blowback abroad, is facing some blowback here at home. Their base of right wingers have been fed a steady diet of culture clash, fear of Islamics, terror tales and they’ve adopted the thoroughgoing belief in the need check for terror around every corner and under every turban. Now, they are venting their well-stoked rage at the Bush Administration for selling off our ports to crazy Arab Islamics. The talk shows, the righty papers and Fox News–the backbone of Rove’s consent manufacturing base–can’t stop hammering their beloved leader for compromising our security.

Welcome to the world of blowback, my friends.

Okay…they are not my friends, but it sounded good.

This is their Dr. Frankenstein moment. They’ve created a monster and now it’s turned on it’s master. These right-wing nuts can’t get enough of the neo-fascist struggle of “US” against “Them,” and it certainly has served the good doctor thus far. But the monster has ignored all of the evidence that they’re being manipulated, that facts show their master is in bed with the most virulent of terror-mongers in Saudi Arabia and Pakistan, and let’s not forget the mountain of evidence that Team Bush cut off all those investigations, refused to heed all warnings and erased any lines connecting those troublesome dots on their terrorism map before 9-11. They–“the right-wing monster”–doesn’t care much about the undeniable war profiteering…the $6-8 billions per month being transferred from their paychecks to Bush cronies via Iraq.

The question is whether or not the monster will see that there is a bigger story. A story of crony capitalism. That people and companies enmeshed in this administration stand to gain from the dubious deal with Dubai Ports. There are billions being floated into and out of this port deal. Now, there is preliminary information that W’s daddy and his financial octopus–The Carlyle Group–has made some big profits off of the chain of sales that led to the port deal.

Unfortunately, the story is focusing on security. Security of our ports is an important issue. But it’s not as important as our porous borders. So far, reports about port security show that there is a fairly good paper trail and a fairly vigilant watch at our ports. The one silver lining in this cloud of blowback is that the monster is still fuming about Arabs, not about yet another instance of crony profiteering. I hold little hope that the torch-wielding villagers in this B-Movie we call America–the media–will take this chance to take the focus off of the fear and put it’s torch to the tower of profiteering that grows daily on Pennsylvania Avenue.

If the villagers do their job, they might be able to show the monster that every time it votes for Team Bush and it’s GOP sycophants that it’s voting against it’s own self-interest. That they are being drained, the country is being drained, to fill the off-shore bank accounts of the oligarchy that parades itself as democratic crusaders. The dots, the lines…all there. Critics of this B-Movie called America will sit back and wonder if the long-awaited plot turn will finally happen…if this is the climactic moment when realizations will set off a chain reaction leading to a resolution of this twisted plot.

Has the blowback finally hit Team Bush where it hurts…at it’s base? Chances are that the fear of Arab evildoers will overcome the reality of crony capitalism gone wild. Honestly, I do feel a bit of sympathy for the monster. I just hope it kills the doctor before the villagers burn it all down.

'Harboring Doubts' has no comments