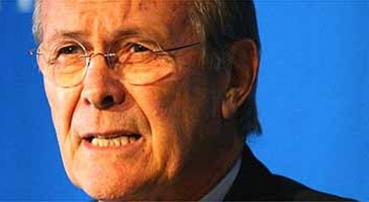 War! Good God ya’ll, what is it good for?

Many reasons, really. It just depends on your perspective and goals.

Rebuilding America’s Defenses, by the Project for a New American Century, lays it all out in easy-to-read type.

But how do you go to war with an enemy that poses no risk, doesn’t attack you or an ally…one that is neutered, contained and unable to mount a real challenge? Kinda like mugging a hobo, or robbing an invalid…it’s hard to justify.

The evidence is clear…the Bush Administration tried within hours to pin the 9-11 attacks on Saddam Hussein. We have confirmation of that from multiple sources, including Donny Rumsfeld’s own handwritten notes. We saw and heard the speeches that pounded out a drumbeat of Saddam-Osama-9-11, a repetitive tempo that sounded like the shrillest Euro-techno. Over 60% of Americans believed in the never-proven connection. Currently, up to 90% of our troops in Iraq believe it. As Dick Clark would say, “It’s got a nice beat, and you can dance to it.” Yeah, dance on the graves of over 100,000 innocent Iraqis. Innocent of 9-11, that is.

But even with all that, the Bushies couldn’t convince the world or the UN. They knew there was no connection. Most knew that there were no WMDs, and that Saddam was not threat.

So what to do?

Have fun with negative intelligence assets. Play games with the truth. Put both together to goad your enemy du jour into attacking you, or trying to attack you, even if it is really just self defense. Fun and games means you can spin whatever events transpire from the fun and games to your advantage. You know the facts, the media is co-opted and controled…the people are at your mercy. Like the Gulf of Tonkin incident. Push…goad…manage…spin, and get your war.

The British law professor who broke the Downing Street memo just broke a new memo. Because there are still good people in the power structure, he was given…leaked…the new memo which he calls the “White House Memo.”

This memo comes from notes taken during a meeting, about five days before Colin Powell’s completely debunked speech before the UN, about Iraq. In that meeting Bush told Blair that they had a date to begin invasion penciled in. Support from the UN, if not forthcoming from the bullshit Powell would shovel in less than a week, would come from a special plan to paint a U2 spyplane in UN colors and fly it over Iraq until Saddam fired on it. Once he fired on it, Bush would have his invasion cue.

Think about that for a minute. And think about the fact that you haven’t heard that in our mainstream media.

Sorry, folks…but that’s how it works. Vietnam, the first Gulf War and April Glaspie and the illegal arming of Iraq by Bush the First. And more. Much more. But there is only so much we can process at any one time. I do, however, direct you to Operation Northwoods…a plan in 1962 to fake a shoot-down of a plane full of students and engineer terrorist bombings in Miami and DC to create support for an invasion of Cuba.

This is not theory. This is fact. In black and white. The rules for fun and games and war. Rules that most don’t know or understand or are even willing to consider. It’s hard to explain, I guess. Some have tried. But the gamemasters know…and our ignorance is their bread and butter.

'Fun and Games and War' has no comments