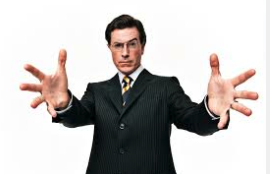 These have one mind, and shall give their power and strength unto the beast.

Last Saturday a one-man vice squad rolled into town and, using a killer set of elegantly written jokes, exposed the DC Media Scrum for what it is…a bunch of whores.

The Whore of Babylon, a.k.a. Washington DC, thrives on intellectual, ethical and financial prostitution. The power elites pimp out their whores–politicians, lobbyists and, woefully, journalists. We are expected to buy their services. Most of us do get screwed, after all. And we certainly pay for their “services” with copious amounts of taxes, gas prices and other forms of consumerism.

But the vast majority of Americans have no idea of how incestuous, how totally whored-out the media is. They watch, read and listen…hoping against hope that journalism happens. Will happen. That they’ll get some semblance of the truth. That the “journalists” actually give a damn.

Enter Stephen Colbert. The Mock O’Reilly, the faux uber-journalist…the comedic babbling head of Babylon. Well, he’s based in NY…but you know what I mean.

Colbert was invited to DC’s annual clusterfuck…the White House Correspondents’ Dinner. A special event at which “the covered” and those “who should be covering them” get together and glad-hand, share cocktails, suck up and back-slap. A night when DC can be Hollywood…glammed out and ready go down on each other on their way up.

It’s a night the Prezzie and the Pressies try to laugh at themselves. Good natured ribbing. Like W’s routine a couple years ago about looking for WMD under a desk in the Oval Office. You know, while ten of thousands are dying. Funny stuff, that.

It’s usually a tame affair. They invite a celeb to come and toss some soft jibes…you know…jokes that caress their egos with the touch of importance.

But this year they got Colbert. And Colbert’s mock media-whore persona was a perfect foil, an ironically appropriate messenger…an unsullied voice speaking truth in one blistering joke after another. Ripping, funny, biting comedic genius.

It was a truly funny set. Just on the merits of comedy writing. He killed. Because good comedy must be based on an element of truth. It’s the bitter truth at the center of a good joke that makes that joke so damn funny.

And Colbert had losta truth to work with.

But all that truth and comedy has caused a stir. The media has blacked out his appearance, not mentioning it or showing it on television, preferring to show W and his impersonator. No mention of the seethe on W face while Colbert hammered him.

Meanwhile, print journalism is in an uproar. Journalists and opinionistas are ranting and raving about Colbert…his rudeness, his lack of graciousness…his supposed lack of humor. That last one is the most specious of the arguments. Colbert was damn funny.

You see, it wasn’t just that Colbert attacked a sitting Prezzie with his rapier wit, but Colbert also skewered the press. The supine and facile bunch of whores who suck face with any official source who can make their career. Who get in bed with the power elite and do what it takes to preserve their access…to stenographic interviews, to self-congratulatory dinner parties…to the high-life of perceived importance that makes America journalism the joke that it is.

The joke that Colbert told over and over again all night long.

But it hasn’t been covered in the mainstream media…they won’t show the jokes…and they are trying to bury him. Because they are the real whores…all Jeff Gannons of one sort or another. They care far more about keeping their status and their paychecks and their kids in elite private schools than a vague, quaint ideal of journalism. They do, however, like to prostitute the idea that they are journalists. Meanwhile, they serve the corporate pimps who keep them on the streets.

Colbert’s shtick encapsulates all that is wrong with media whores. His faux attack on “truthiness” and on the “well-known liberal bias” of reality…and his generous heaps of sycophantic praise for the Administration. Colbert’s shtick mocked the utter and complete lack of real reporting by the White House Correspondents’ and the vast majority of DC’s media whores.

And they cannot stand to see themselves for what they are…on the one night they all get together to celebrate the very sense of importance and entitlement that makes them the whores that they are. Colbert’s media whore persona offers Americans far more “truth” that they get in a month’s worth of news from the crowd se faced that night.

So, they’ve come together to banish Colbert into the margin, to minimize and trivialize and criticize. Because they want to keep turning their tricks. Because they’ve been shamed.

Not surprisingly, the internet is buzzing with praise for Colbert. People, despite the media’s best efforts, realize that they’ve been getting screwed for years and they are responding to Colbert’s appearance. Because he was funny. Because he was ballsy and bold in front of a bunch of cowards. Because he was right.