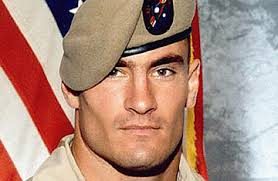 That’s the lead of an AP article that finally broke through the years of propaganda and lying by the Pentagon and the White House about Pat Tillman.

Follow the link and read it yourself…but here are some highlights:

Also, medical examination concluded that the bullet holes in his head were at a range of about 10 yards. And much of the evidence was hastily burned…his clothes, his flak jacket.

So, here is this dude who responds to the 9/11 attack by leaving his rockin’ gig as a Pro Football player to join up and fight for his country.

He goes through training…gets on the fast track to Afghanistan…and then realizes that the whole damn thing, particularly Iraq, is a sham.

He told a buddy that the adventure in Iraq was illegal.

He began talking to his fellow soldiers about the 2004 Election and why they should not vote for Bush.

He set up a library of relevant books and works of philosophy for his comrades to read.

He even began making contacts with anti-war intellectuals and authors, like Noam Chomsky, to set up meetings once he got out of the military.

This dude, this much media-hyped hero of patriotism and self-sacrifice in the face of evildoers who want to destroy us because we are free (what joke that is…our so-called freedom, I mean), goes to war and sees it for what it is. He is disillusioned. And smart. Well-read. And wants to do something about it.

And then he is murdered. Fragged. In the head. At close range.

Then the Pentagon Propaganda Machine goes into overdrive…covering up the murder with a story of heroism…of him charging a hill by himself.

The story doesn’t work. Too much truth, too poorly executed a sham-story. Then it becomes friendly fire. More cover-up. More lies. More questions.

They had an actual poster boy…they printed actual posters…for taking up arms against the Godless Brown People who, suddenly, became a poster boy for everything that was wrong about the wars. Someone who could, with great credibility criticize an empire being built on the back of dudes and chicks with less resources and less choices than him. Many who had the military as their only choice in an increasingly screwed labor market, educational system and increasingly oppressive debt slavery.

And there he would be…ripping the whole damn thing a brand new asshole.

Not good if you want to protect your propaganda and continue to use him as a recruiting tool.

So, he was murdered.

It turns out he really was a patriot…a citizen who cared enough to go to war and was aware enough to question what he saw.

Rest in peace, Pat. Sorry to say, I think the country you fought for is not far behind.

'Patriot Games' has no comments