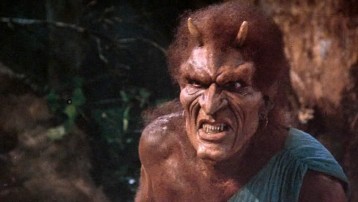 “I hate all Iranians.”

That’s what Debra Cagan, Deputy Assistant Secretary for Coalition Affairs to Defense Secretary Robert Gates, told a group of British Members of Parliament at a meeting.

Isn’t that nice? I mean…isn’t is great that she hates ALL of ’em? I mean, why not? They are brown. They are unwilling to take our orders, or sign over their dwindling oil reserves to US corporations. They are infidels. Let’s hate them all.

Now, this comes from a “woman”:

…who looks quite a bit like Calibos, the tortured badguy from “Clash of the Titans”:

…but I guess I shouldn’t demonize her.

We have enough of that right now: Demon. Devil. Evil. Dictator.

Because Cagan’s “hate them all” attitude is just one part of the psychological conditioning we are seeing regarding Iran…or, more precisely, Target Iran (I predict you will see that on a Fox News screen soon).

You see, Americans will accept war if they are fed a steady diet of demonization.

You’ll recall that Saddam was compared to Hitler by Poppy Bush…Bush the First. Which is appropriate, I guess…since he was illegally arming Saddam almost within weeks of Saddam’s invasion of Kuwait. And Since Rumsfeld, Bush the First and the Reagan Adminsitration supported, even requested, his attack on Iran. You’ll also recall that we were supplying both sides of that war…arming Saddam and covertly…illegally…supplying the Iranians in a little operation we call Iran-Contra.

So…back to the appropriateness of Bush the First comparing Saddam to Hitler…because his father, Prescott, was supplying money and oil to Hitler during the 1930s. Really. Google “Union Banking Company.”

Now, I am not going to defend a repressive regime. But I am going to point out that we are in the prep…the run-up…to the coming attack on Iran. It almost happened last year. But Iran took those Brit sailors hostage as an additional carrier group was steaming toward the Persian Gulf and, I suspect, forced Tony Blair to bail out of the attack plan because the British public would’ve been pissed if there was an attack that could’ve led to the death of their cause célèbre sailors.

Iran threw a monkey wrench into that one.

However, the planning has been going on for years…for years and years. This has been in the works…the Neo Con Agenda demands it. Iran is the last Middle Eastern oil producer we cannot control.

We’ve been trying for over a century.

But the average American doesn’t want anything to do with another war. No, not unless we are fighting evil. Because our Christian Crusader mentality…the same mentality that wiped out American Indians and caused us to hate Godless Communists…is being stoked to attack Iran. Because this dude:

But he is just the poster boy. The Neo-Cons want a client state…and want to strengthen Saudi Arabia (who the Iranians do not like one bit) and Israel. They want to consolidate their hold on the oil sources the Chinese depend on. They want power. More power. They want money. More money…the kind of money only wars can bring. (Iraq is currently sending $2 billion per week to various defense and construction contractors).

Nuclear weapons? Who cares? Israel has dozens, some intelligence sources say hundreds. We, through the CIA, helped Pakistan get the bomb…and their intelligence service helped to create the Taliban and Al Qaeda (helped by money and religious teachers from the Saudis). Isn’t that more of a problem than Iran having a couple bombs? Which they don’t. Nor will they for years.

Yet, if you were the Iranians, wouldn’t you want a nuke or two to keep the US from doing to you what we did to Iraq?

Or maybe it’s because the dude denies the Holocaust. Well, it is an awful thing to think…but should we bomb a country because we don’t like what their president thinks about history? Plus, I listened to his speech at Columbia University last week, and he referred to the “historical fact of the Holocaust.” Some have said previous “denials” and threats “to wipe Israel off the map” are actually mistranslations of his speeches. Now, he did not question the Holocaust once in his speech at Columbia, but that was the headline in the AP story.

I dunno…until I can find a Farsi translator I can trust, the jury is still out. Because I know that the war machine is gearing up, that the propaganda is flowing…and we are seeing more and more of a newsmedia push to prepare us for a big-ass bombing campaign.

2000 targets, ready to go. Just google Seymour Hersh and Iran…it’s all there.

And there is one more thing…this warning from Mr. Monkey Business, Gary Hart. Remember him? Ran for President in 1987…but got caught with Donna Rice on the ironically-named boat Monkey Business? Since then, he’s become a Council on Foreign Relations bigwig who called on Bush the Second to use 9/11 to create “a New World Order.”

Well, he wrote this last week in an open letter to Iran:

Having done so, you will surely recognize that Americans are reluctant to go to war unless attacked. Until Pearl Harbor, we were even reluctant to get involved in World War II. For historians of American wars the question is whether we provoke provocations.

And Pearl Harbor, the other reference, is now increasingly thought of by historians to have been “allowed” by Roosevelt. We know for a fact that Churchill knew it was coming. And many think, based on evidence, that Roosevelt knew. That is why the whole fleet was not in Pearl Harbor, as scheduled, when the Japanese attacked.

I just find it interesting that Gary brought it up…since all it would take is one minor attack here in the US of A, one we could blame on Iranian agents, to get the public behind a full-scale war with those Evildoers du Jour.

Hell, if 70% thought Saddam was behind 9/11 back in 2003, and 30% still do despite NO evidence…and despite persistent  evidence that he despised Al Qaeda…it wouldn’t take much to convince enough Americans to join Cagan in hating all Iranians.

Bombs (not that far) Away!

'First, find a another Hitler…' has no comments