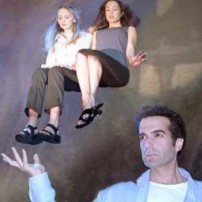 David Copperfield ain’t much of a magician.

Oh, sorry Dave…”Illusionist”…not much of an “Illusionist.”

He just got raided by the FBI after being accused of rape by an unidentified woman.

Dave is all about the women, apparently.

He can make ’em levitate, but he can’t slip them a little magic salami or cop a feel on the sly without getting caught.

Cop-a-feel Copperfield’s act was not very magical. His hand not very sleight.

“For my next trick, watch me pull a rabbit out on my pants!”

Which begs the question: How could a guy make the Statue of Liberty or a 747 disappear, but not be able to get some on the sly without the chick knowing it?

But he could’ve used a plume of fire to create the illusion that he wasn’t getting all grabby with his possible victim.

Anyway, the warehouse is filled with props and devices he uses for his show, but none of the hats or rabbits were taken.

Still, Dave’s larder of magic tricks isn’t all there is…it was also known as the “International Museum & Library of the Conjuring Arts.”

Yeah. “Conjuring Arts.” I wonder if he can “conjure” up an alibi?

This description comes from a 1993 New Yorker profile:

“It was Copperfield’s conceit that the ideal way for a visitor to view the Mulholland Library would be to pass first through a storefront filled with lingerie-clad mannequins and display cases of intimate feminine apparel. With enthusiasm, Copperfield escorted Jay around the premises, insisting that he read each of the single-entendre slogans posted on the walls — “We Support Our Customers” and “Our Bras Will Never Let You Down.” When Copperfield pressed one of the red-nippled breasts of a nude mannequin, the electronic lock on a mirrored door deactivated…”

Looks like Dave’s been conjuring up a life-long sexual addiction and fixation on breasts.

Ironically, his lawyer said that Dave has “never forced himself on anyone.”

I disagree, because I feel violated whenever I see even a clip of his cheesy act, hands waving around like a Price is Right girl showing off a barcalounger…and that super-serious glare, eyes made up with eye shadow, that he throws at the camera like he’s an actual wizard from Dungeons and Dragons.

He’s got none of the class and flair of, say, a Doug Henning.

Doug, who did “wonderful” magic, had the good sense to levitiate in full lotus on a rainbow when he got grabby.

Doug knew what he was doing, eschewing the eye shadow and effete swooping with his body that Dave indulges in…that Dave forces on us, if you will.

Doug really pioneered the soft, long-haired look that blends a good dose of New Agey sensitivity with the inherent masculinity of a good moustache.

And it paid off.

But not like it did for his greatest imitator, PBS pledge-drive fave and all-around musical magician…Yanni.

The Yan-ster shamelessly stole Doug’s look and added a huge wall of hyper-emotive, synth-sound to lull middle-aged women into a feeling of well-being and being understood.

The Yan-ster had an international gaggle of post-girlish geese who swooned whenever he threw his prodigious locks backwards into the air as he triumphantly mimicked the sensitive sounds of John Tesh.

Unfortunately, ol’ Yanni kinda lost his following when he got popped for domestic violence.

I guess all that synth-sensitivity was little more than an act…a marketing strategy…another “pseudo-artist” forcing himself onto all of us.

Much like Dave, and the tired illusion that he actually is entertaining.

'Turning Magic Tricks' has no comments