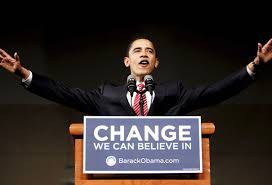 The Dems are nearly done.

Some things struck me as I watched it gavel to gavel online, thanks to C-SPAN, while working on a script at my computer.

One is the house band. They’ve played a steady diet of Earth, Wind and Fire tunes. I love EWF, don’t get me wrong. But the songs have been pedestrian covers, and it did occur to me that they really should roll out some Lynyrd Skynyrd… or something. All I could think about were the tens of millions of closet racists who are already suffering from skin-crawling anguish at the thought of Obama…and then they have to try to wrap their heads around the pleasing funk of EWF and the dozens of cutaways of African-Americans dancing to that funky stuff.

Also played…A Taste of Honey, the O’Jays and, in a fit of musical outreach to boring White people, Bon Jovi.

Yet, the band came through tonight. After Bill Clinton made his much-anticipated speech, the band kicked out a killer jam: “Addicted to Love.”

How perfect is that?

Another thing…is where have the names Bush, Cheney, Rumsfeld and Gonzales been? How about torture, Katrina, stolen elections in FL and OH, or Diebold? Or billions missing? Oil profits? Lies? Tens of thousands of dead Iraqis?

How about something other than “change.”

Yeah, a few mentions here and there…but it has been weak.

Major props to Michelle Obama’s speech. I would vote for her to run this country and the world. She is spectacular.

To the women who are boo-hooing over Hillary…please take a Xanax. Yes, a woman getting the nomination would be an amazing historical event. But, dude…a Black Man?!?!

Now, that is historic. More so than a White woman. Sorry, gals…but Black dudes were still being lynched mere decades ago. Jim Crow and segregation. Add to that the total and complete disdain and demonization of Black men throughout the culture…as recently as 1988 and the Willie Horton ad run by Poppy Bush.

THIS IS HUGE, people. A Black nuclear family, on stage at a party convention…auditioning to be the First Family. Hillary chicks…get the f*ck over it. This is historic.

It is the one thing that makes me optimistic. Blacks have waited a long time for this…and most thought they’d never see it. Ever.

And I am not a Democrat. Never have been, btw. Just so you know. But I do love funk. And I have a tendency to identify with Black folk. Particularly the Isley Brothers.

Now, that brings me to the GOP Convention.

What the hell will they do? I mean, what do they feature? Getting away with lies and torture and war crimes and stealing from the treasury and taking away Constitutional rights?

How do they sell Americans the worst eight years in nearly a
century?

I expect to see a Broadway stage-quality mock-up of the Hanoi Hilton, with a shackled McCain tapping out his acceptance speech in Morse Code on a cockroach-laden sewer pipe.

The guards will be dressed like Kenyan Muslims…and they will have strings on their limbs that lead back to a giant, papier-mâché-headed Rasputin who keeps on hugging the trees from which he, astride them, pulls the strings.

Condi Rice will be in another cell, interpreting the Morse Code for the audience.

The Vice Presidential nominee will have Colin Powell place a necklace on him with a vial containing a little bit of Anthrax and some of Angelina Jolie’s blood. Enough to “kill all freedom-loving people in the World.” Jon Voight will narrate.

Condi Rice will host a runway show of the lastest evil-dos and dont’s for fashion-conscious WASPs and country-club cougars.

Joe Lieberman will come out dressed as Moses in a sea of actors dressed as Arabs, which will part as he approaches the podium. After the speech he will lead the entire audience in stoning, with cute little foam rocks, an effigy of John Edwards and chant… “Adulterer, Adulterer!”

Mike Huckabee appear via satellite from the studio of Pat Robertson’s 700 Club, and he will ask viewers to “call in now and make your seed-gift” to the GOP. God and his Vice-God, Dick Cheney, will..they promise…respond to that leap of faith by returning to the faithful holy-oil anointed stock in KBR and a guaranteed room in a KBR-built FEMA camp. The “holy oil” will be provided by Exxon-Mobil.

Mitt Romney will finally and categorically renounce Gay Marriage as he descends onto the stage from a large, colon-like tunnel with a “one-way” and “no entry” signs on it. He will be mobbed by his entire extended family…some 323 Aryan-esque Mormons…who will be wearing T-Shirts adorned with the slogan:
I’m Pro-Life and Con-Dom!

President Hamid Karzai will appear to thank the Republican Party for liberating his country and then be waterboarded…all the while laughing as he comes up for air and shouting, “if this is torture, I don’t want to be in compliance with the Geneva Convention!”

Robin Leach will host a video segment in which he tours through McCain’s houses.

The Keynote will be given by hologram of Ronald Reagan…premiering GE’s new technology that brings “Good things back to Life.”

At least, that’s one possible way for them to go at it.

'Conventional Thinking' has no comments