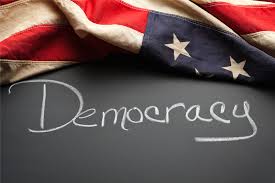 Voting isn’t everything. Just take a look at Egypt.

Throughout Mubarak’s tenure, his regime staged campaigns, held elections and people voted. It was a “democracy.” More precisely, it was a self-proclaimed “republic,” just like some other country we know. But it was, for all intents and purposes, a one-party state. The votes cast did little to address the needs, wants and aspirations of the people without whom there is no “Egypt.”

That’s why democracy, a one-word ideal thrown around with such impunity, often has less to do with voting and more to do with involvement. With organizing and action and communication. With an assertion of common goals and the will to endure hardship.

In fact, there are times voting does more to undermine democracy than it does to create it.

Often, voting merely gives the appearance of redress. It parades in the trappings of involvement, but, because nothing seems to change, it ultimately convinces people that there is nothing else they can do. It perpetuates a feeling that, despite how much you campaign, canvass, contribute and mobilize on Election Day, there is no way to stem the tide or to make a change. No way to be heard in the “corridors of power.” As the saying goes, “You can’t fight City Hall.”

But it is not the only option.

Look around at other democracies. Over and over we see the French and the Brits, Koreans and Italians, all willing to take their grievances to the street. They do not rely on periodic popularity contests to solve all their political problems. They take action. They march and strike. And it works. Sometimes their “leaders” even respond to their demands. But not always. Yet, even if it fails to change policy, it works on a level beyond merely climbing the greasy pole of political outcomes. It creates an élan, a spirit of cooperation and common purpose and unity. It creates movements, like our own Civil Rights movement. It creates democracy.

Because there is one vote you can cast anytime of the year. It’s the vote you cast with your dollars. Look no further than Christian conservatives for a working model of boycotts. Donald Wildmon used his American Family Association to organize boycotts against various companies. If nothing else, he raised the profile of his opinion. Sometimes, it even worked. One boycott persuaded 7-Eleven to stop selling Playboy and Penthouse. So, if you are tired of seeing some cable “news” sideshow act, go after the commercial sponsors. Once again, the Egyptians give us a clue…because social media is credited with sparking the protests. If Donald Wildmon can do it with radio and snail mail, why not try texting, blast emails and page recommendations?

And look no further than the 20th Century for “true blue,” All-American examples of working boycotts. From buses in Montgomery and grapes in California, democracy took shape when people chose not to use or to buy. It was more than mere politics. It was people organized around a common goal. In a perfect world, voting and politics are the ultimate expression of democracy. But the world is far from perfect.

As years roll by, American voters lament that their votes do little to “change” the direction of their country. Republicans and Democrats act more like two wings of the same party with each passing year. Dissatisfaction grows because the one mechanism of democracy we’ve been told to rely on—voting—is less and less effective with each profitable, deck chair-shifting election.

Perhaps that explains why American Idol and Dancing with the Stars are so popular. They offer us a chance to cast a vote that “matters.” It satisfies the voting itch in ways not satisfied by electing some high-gloss intermediary to go glad-hand in a world of K Street confabs and Georgetown dinner parties. Like politics, Idol and Dancing are personality-driven contests. Unlike politics, people with an actual talent…actually get rewarded. The voter gets rewarded, too, as the person they prefer reaches the finish line, or loses fair and square. It is clean. But it is not revolting.

As voting for politicians loses its meaning, voting for singers and dancers offers an immediate, psychic satisfaction that the Republicans and Democrats can only dream of providing in the next election—with people feeling a part of something bigger than just themselves. It is the feeling that fed the election of Obama and Hope, Inc. Like it or not, it’s also the feeling behind the Tea Party. Unfortunately, most efforts focus on the limited outcomes of voting. And the Tea Partiers might be in for the same lesson learned by the Hopesters—that the red meat you were fed before the election ends up as the same, corporately-funded sausage on Capitol Hill.

The red meat is the bait. Voting is the switch.

But the game might be changing. This reliance on voting met its match in Tahrir Square. Years of “choice in name only” left many Egyptians financially broke and their voices muted. They realized, though, that democracy extends beyond the limits imposed by those at the top. The pyramid is built on its base. The base can, using other democratic means, flip the pyramid on its head. The base simply needs to find common cause and the will to march.

Is this what we see unfurling across the Arab world? Is it a desire for a sense of democracy that goes beyond jury-rigged voting? Jordan and Iran and Syria and Bahrain all hold elections. The people of America’s closest ally—Saudi Arabia—don’t vote at all.

Isn’t it funny that America’s closest ally is also the most dictatorial?

But they, like their neighbors, have a kingdom coping with dissatisfaction. That dissatisfaction seeks out and punishes their kingdom’s American backers as the primary targets for their unfulfilled aspirations. That’s why the wave of demonstrations is so dangerous to the Saudis and others in the region. The people are finally training their sights on the real target of their aspirations. They are making democracy on the fly.

Which brings it home to America.

Because we, too, live in a time of great dissatisfaction. Voting for the Left or the Right keeps us stuck in the middle of bizarre soap opera rife with power-plays, betrayal and personal peccadilloes. Politics is like Dynasty or Dallas, merged with the “voting” of American Idol. And how often have we seen our representatives clamor to dance with the stars? They certainly ain’t dancing with them what brung ’em! Or are they?

So, no matter your political persuasion, acknowledge the people who stormed the state capitol in Wisconsin. Agree or disagree, non-violent assembly constitutes some of the most democratic type of action people can engage in, and it’s a right guaranteed in the Constitution. Voting is not the sum total of democracy. It is bigger than that.

Isn’t it ironic that, after years of American meddling, the people of the Arab world would be the ones giving us a lesson in democracy? That the very regimes we’ve supported and propped up are the very regimes bending and breaking as their people take to the streets?

It may look ugly to some, but—from the Founders through to the struggle for Civil Rights—we, of all people, should know that democracy is revolting.

'Democracy is Revolting' have 3 comments