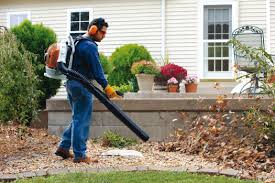 Nothing more accurately symbolizes the current state of America than the proliferation of the leaf blower.

Every day, people across America hear the loud whine of tiny two-stroke engines as they belch out a mixture of smoke and unburned fuel. We see the dust and debris fly by with hurricane force as the flailing tube does little more than push the muck away from someone’s front yard, drive it out of office parking lots and onto city streets or, all-too-often, merely re-disperse it all over your car.

Unlike the low-tech options of old—the rake, the broom and the shovel—the leaf blower opts for quantity over quality, for style over substance. The leaf blower doesn’t really clean up the mess. Rather, it just pushes it down the road a bit. It doesn’t really “do” anything except provide the illusion of fixing the problem. And, along the way, it pollutes the air with ear-damaging noise and lung-burning exhaust.

It’s a perfect symbol of 21st Century America and our politics. But the analogy goes even further.

Because the people wearing those backpack leaf blowers are, almost without fail, immigrants. It’s a good bet that many are “illegal.” And, until we can replace them with robots made in some far-off factory, we will continue to rely on men and women from neighboring lands to do the “dirty work” of propping up America’s “service economy.” It’s an economy that doesn’t really make much, but provides a massive pool of easily-manipulated labor to those who want to be serviced. Hotels, car washes, landscaping, house cleaning—do you want it done, and done cheaply? Don’t worry. We’ve got someone hungry enough to do it for less than the next guy or gal. Certainly for less than some American who’s been told to expect a decent standard of living.

The pivot point from the manufacturing economy to the service economy came during the Age of the Great Gipper. Reaganomics flipped the switch from building things to simply financing things, from spreading the wealth to letting it trickle down from the top. This redistribution upwards created a massive new market for “services.” Services are what people with money buy to keep their fingernails clean, keep their cars waxed and their gardens manicured. Reagan’s policies accelerated the rot in manufacturing and crushed the power of labor unions to keep wages livable and preserve a union-inspired safety net of benefits for those families who did their own dirty work. As we built less and less, a larger and larger pool of labor competed for lower and lower paying jobs.

And that pool of labor has gotten far more crowded over the years. The rise of anti-immigrant groups and identity politics is a direct result of the “supply-demand” equation economists love so much. Corporations and businesses love it, too. This is the irony the current “immigration crisis.” The people who yell the loudest about “illegal immigrants” are, more often than not, the same people who vote for the very politicians who represent the business interests that benefit the most from continued illegal immigration.

Big business relies on a cheap, malleable workforce to keep its costs down and its profits up. In fact, the longer immigrants remain “illegal,” the better it is for everyone from hoteliers to hog farmers, from big-box retailers to construction firms. If immigrants suddenly became “legal,” these businesses would be unable to low-ball their wages, to pay them off the books, to deny them health care and safety standards and, best of all, to threaten them with deportation if they deign to speak up about their exploitation. Worst of all, they might even vote…or join unions! The illegal immigration issue epitomizes the ways in which this “leaf blower system” perpetuates itself. All noise, no solution.

And those so-called “conservatives” who pollute the airwaves with invectives about the “immigration problem?” They are either stupid or cynical.

They are stupid if they think their wealthy corporate benefactors actually want to solve the issue. The longer this issue remains, the better their profitability. Cheap labor is the easiest part of the business equation to manipulate. It’s hard to change the cost of resources and capital. It’s far easier to alter the price of labor. That’s why new CEOs or Wall Street merger partners like to cut the labor force immediately after they take over. It spikes the profit margin, almost within minutes. Wall Street loves it, stocks rise and everyone other than the worker makes out like a bandit.

Sadly, it’s more likely that the denizens of Congress and Right Wing media are more cynical than they are stupid. Because they know immigration is both a wedge issue and a boon to ratings. With Americans struggling to survive this Great Recession, anti-immigrant feelings offer a reliable hot-button they can push over and over again. It’s “red meat” for angry, economically disenfranchised voters. The blathering heads in the media feed “law-abiding Americans” a steady diet of “stories” about illegal immigrants supposedly crowding emergency rooms, openly speaking Spanish and taking jobs that big business doesn’t really want Americans to do in the first place. They’d cost too much.

So, these shills are, like those leaf blowers, just blowhards who make a loud noise and push the problem around without cleaning up a damn thing.

Really, it’s a perfect system. Corporations’ get a bottom line boost from destabilizing the labor market and then they fund conservative demagogues who keep people focused on immigrants rather than the financiers of a system that concentrates all the wealth at the top. And, as a side benefit, they fill their growing service needs with cheap, illegal staff. A steady supply of nannies, gardeners and low-cost construction workers offer the final bonus to the super-elite. Ultimately, it also increases competition among workers who fight over fewer jobs. American workers are among the most productive in the world because they are fighting to keep their heads, and their mortgages, above water.

And they are not alone.

After Bill Clinton ushered in NAFTA, American agribusiness drowned Mexico’s small farmers by flooding them with heavily subsidized corn. Unable to compete, those farmers left home and came across the border seeking subsistence. Coincidentally, those same agribusinesses quickly ramped up their profitable factory farms and slaughterhouses by employing the very wave of illegal immigrants they’d helped to dislodge in the first place. Ross Perot rightly heard a sucking sound, but he didn’t realize it was working in reverse. Did it actually portend the age of leaf blowers?

Ironically, the last politician to actually do something about immigration was the Demigod of Conservatism himself—Ronald Reagan. In 1986, he did the one thing that could resolve much of this problem…he signed an amnesty for “illegal immigrants.” Today, by “legalizing” their labor, we could force businesses to treat them exactly like they don’t want to treat native-born Americans—making them pay a living wage within the legal framework of American labor practices and standards. Illegals are their exit clause from this system. It’s time to force them to treat everyone like an American.

Ultimately, it may be a moot point. Even the “service economy” is blowing away as it’s dispersed down the road of globalization. The less labor-intensive parts of the service sector are moving to India and the Philippines and anywhere else taxes are avoidable. For the captains of capitalism, labor is just a number to be crunched. It doesn’t matter what language you speak…money talks. If you listen to it, it’s telling you to blame “them.” To focus on keeping “them” out…while the real “them” leave out the back door.

Instead of blaming the poor sod with the blower on his back, it’s time we looked at the people who strapped it on him in the first place. Isn’t “service” a root word for “servant?” If there’s one thing rich people don’t mind spending money on…it’s servants.

If nothing else, we are going to have some very rich people here who need to be serviced. Perhaps it’s time we returned the favor, because they’ve been “servicing” this economy for decades.