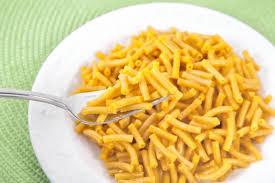 Nature has this funny way of warning off hungry beasts when they look around for something to eat. Like well-lit drive-thru menus, Mother Nature’s “Do Not Touch” sign comes in an array of beautiful, neon-bright colors.

The Poison Dart Frog comes in a variety of stunning blues, reds and yellows. The toxic Blue-Ringed Octopus sports a number of fluorescent, purplish-blue spots. The deadly Box Jellyfish glows a bright blue, too. Blue is a fairly good indication of poisonous consequences after an ill-advised nosh. Never trust blue food, right?

But blue is just the start. Evolution has served up a cornucopia of “Stop Right There” signs:

The ominous red hourglass of the Black Widow.

The toxic warning of a Monarch caterpillar’s yellow, white and black stripes.

The vibrant, threatening reds and yellows of a various deadly mushrooms.

Yeah, Fruit Loops. And juices and macaroni & cheese and pickles and candies. If you turn over that package and peruse the label of almost anything you buy at a gas station convenience store, you’ll find a color to suit your mood.

And, perhaps, alter it.

With taste-tempting names like Blue No. 1, Red No. 40, Green No. 3 and that mouth-watering additive called “Yellow No. 6,” how could you not want to gorge yourself silly? And what was wrong with Red Nos. 1-39?

Ironically, by cooking up all those colors we’ve unintentionally mimicked nature’s penchant for saying, “See, I told you so.” It turns out that the unnatural array of reds, blues and yellows we regularly eat…may be making us sick. And generations of kids reliant on pharmaceuticals.

Evidence from various studies, plenty of anecdotal evidence from pediatricians and impassioned petitions from concerned parents all point to a correlation between artificial dyes and hyperactivity in children. In fact, some doctors and parents simply remove Red No. 40 from the diet of an ADHD kid and, voilà, the condition subsides. They say it’s like turning off a light switch.

That’s why the FDA finally reviewed its long-standing, unequivocal defense of artificial coloring and its widespread use in foods and drinks of all kinds…particularly in those products targeted directly at children. Just keep on doing studies and signing petitions and, eventually, the FDA will have to convene a panel, right?

And, guess what? It’s safe!

The ethically squishy FDA is completely comfortable with these vibrant chemicals and the bizarre fact that many are made from petroleum products. The panel rejected warning labels by a vote of 8 to 6, and also rejected the basic premise that there is any evidence of a link between hyperactivity and artificial food dyes, despite the claims made in a 2007 article published in the British medical journal Lancet. In fact, two studies sponsored by the British government linked artificial coloring and preservatives with hyperactivity in children. Those conclusion-jumping Brits asked food producers to halt the use of chemical colors and even petitioned the European Parliament to require warning labels.

But fear not, American consumer. The FDA has spoken.

Bright chemical colors are A-OK with the FDA. The makers of Blue No. 1, Red No. 40 and colorfully-speckled Cool Ranch Doritos can keep on churning out their festive products. In fact, they should buy stock Novartis Pharmaceuticals. They make Ritalin, which treats hyperactivity. Financially, it could be and, perhaps all already has been, a big “win-win.”

Yet, the Yellow No. 1 Canary in the coalmine might come from an unlikely source—Kraft Macaroni and Cheese. Despite this ongoing indifference of the FDA toward another potentially harmful chemical, Kraft Foods, Inc. is increasing the number of products it makes without the use of artificial colors. You can now buy Mac and Cheese that doesn’t glow with an unearthly tint of highway safety yellow. Kraft is moving to meet a “growing demand” for foods that don’t resemble the colorful, poisonous warnings so commonly found in nature.

Perhaps Kraft, which probably has done far more research on these colors than the FDA or the corporately-sponsored science departments found in universities, is not just anticipating a growing market, but, if they are smart, heading off more independent science from Europe or US public interest groups. It might be more than just a classy move. It might be a move to avert future class actions.

If these dyes are harmful to even a small percentage of “susceptible” children, why would anyone risk feeding it to children at all? Or to themselves? Don’t we now have adult ADHD? And what if we learn later that petroleum-based chemicals are, in fact, not a good thing to eat or drink? And why don’t we know that now?

As with everything in 21st Century America, you are not just what you eat, you are what you buy. When you are out there hunting down some pre-packaged, pre-formed and woefully over-prepared dinner, do what the rest of the world’s beasts do—look at the label.

Some colors are too good to be true and, perhaps, too harmful to be eaten.

'Pretty Food is Dangerous' have 10 comments