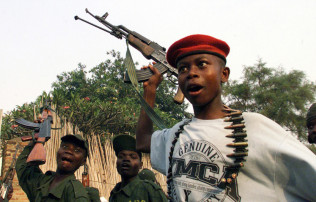 HEADLINE: Obama waives penalties on countries that employ child soldiers – again! Every president since Nov. 22, 1963 has been vetted by “the system.” You cannot be president unless you’ve been determined to be “a sound man.” In other words, you will service elite power, foster the ongoing money transfer from taxpayers to corporations via the Pentagon and steadfastly refuse to forestall a far-reaching imperial agenda. You will use military power and military aid to preserve access to profitable natural resources. You will protect the national security state and its secrets. You will not investigate, indict or punish those who vetted you, or those who came to “power” before you. And you will sustain the two-party system by shifting the public’s attention away from all of these responsibilities and, instead, focus their attention on the never-ending public relations battle between you and your opponents who, by and large, have been vetted by the self-same system. Jimmy

Carter was the only loose cannon allowed on deck, and we know how that turned out…it led to the October Surprise and Iran-Contra. Obama was vetted. Take it to the bank…that is, if you can still afford to keep an account in a bank.

'Obama Takes a Stand on Child Soldiers' have 4 comments