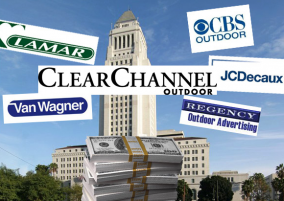 Voting between the lesser of two evils.

Two wings of the same ruling party and the elusive dream – or unrealistic fantasy – of a “Third Party” that will…finally…shake up the system.

The sneering cynicism that comes with the evil of two lessers.

You see, we don’t really have a democracy or, for those who like to be precise, a functioning democratic republic. And it isn’t really governance. Rather, we have a political industry that launders money. Tax dollars pay the salaries of Senators and Representatives and provide for their small armies of staffers. We pay for their “fact-finding” junkets. They also get great healthcare, a gym and security. The political appointees of the Executive Branch do pretty well, too. And, by and large, the same thing happens at the state level.

That’s where the partisan laundry service really takes the shirts off of all our backs.

Political contributions get cycled through PACs and SuperPACs and lobbying firms and advertising firms and polling firms and law firms. As the money comes into campaigns, it pays for staff and also ends up lining the pockets of all those political professionals who keep the “wheels of progress” turning or, more often, not turning. Frankly, less progress extends the life of issues and the candidates who run on them.

Billions of dollars go through this vast laundry service.

Think of all the money made over the years on both sides of abortion. And gay marriage. And think of all the candidates whose suits would be even emptier if they weren’t running on some hyper-contentious issue. Hot issues equal big money. Other issues get ignored. Where is the ad money in ending wars? Or bringing troops home from around the globe? If you want the issue to get into the cycle, you have to put change into the machine. And we ain’t talking chump change. Or mythical change. We’re talking cold, hard bundles of cash. Millions and millions of it.

And the news media is, perhaps, the key cog in that grinding machine. The more contentious the election, the more dichotomous the debate and the more heated the rhetoric…the more enriching the whole process becomes to the seedy squatters currently occupying the Fourth Estate. By generating more heat than light, the news media generates more revenue than facts. How? By filling all those nifty commercial breaks with lucrative political advertising.

You see, the dirty little secret of the broadcasting industry is that they depend upon the political advertising that comes during the two and four-year election cycles to turn a profit. A big one.

Those predictable windfalls are good for business. Very, very good. Don’t expect the media to do anything other than feed that egg-laying goose.

So, highlight the personalities. Knock one down, lift the other one up. Stoke the competition. Forget reporting on facts and turn it into an ongoing soap opera. Draw it out and draw us in. Jabber on about polls. Red versus blue equals green. Ka-ching, ka-ching, ka-ching.

The media loves it. Wants it. Needs it.

And what do we see more and more? The permanent campaign. Forget governing. How many times have you heard some blathering head talk about “campaign mode” or heard some faint voice of sanity lamenting the election starting earlier and earlier with each passing year? The reason is simple – a rising tide lifts all their boats and sculls and yachts and nifty little sloops.

The sorta boats that cruise around Martha’s Vineyard or the azure waters of the Caribbean, far away from the iceberg they are crashing us all into.

Media professionals and advertising agencies and consultants all make money off of “us versus them.” They all make money off of the status quo. So do the ad buyers and local station executives and owners. And, as national and statewide campaigns become more and more expensive, the cable networks and broadcasting’s big four – ABC, CBS, NBC and FOX – all rake in the cash. Your donations are more likely to end up in the pocket of some cigar-chomping chump than into the needy hands of some eager, motivated canvasser.

When you wonder why nothing gets done, or why problems only seem to get worse amidst the din of hyperbole and bickering, think of it all as a daily drama. It is a soap opera. And why were they called “soap operas?” Because those quickly-crafted melodramas were designed to hold your attention just long enough to sell you soap. Dish soap and laundry detergent and hand-repairing cleansers. That’s the point of all the drama and tension. It sells soap. And that’s the point of the Political-Industrial Complex. All that drama and hyperbole…it sells soap.

For the media professionals who sell it to us all, it’s money in the bank.

'The Political-Industrial Complex' have 6 comments