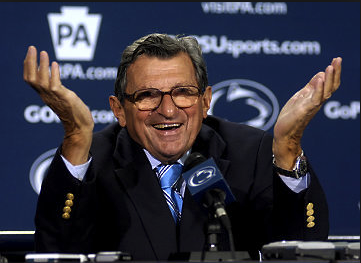 If Joe Paterno was Japanese…he’d have resigned immediately, accepted responsibility and proclaimed the disgracing of his honor, his family’s honor and the honor of Penn St. But he’s American. So he blithely goes to practice, gripes about being fired and then a bunch of idiot kids rampage their own school because a de facto co-conspirator in child molestation lost his job as football coach.

Is America a twisted place, or what?

Is America twisted? Or what?

If nothing else, the American Way has been twisted and the current goal is to rise to the place where the buck stops so you can then collect it and, if anything unfortunate happens, pass it.

'Joe Paterno in Tokyo' has no comments