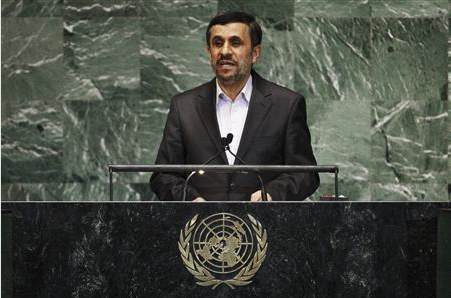 Headlines are designed to grab the reader’s attention and pull ‘em in.

Just sounds like par for the course when it comes to Iran’s dangerous doom-dealer, right?

Well, there is a bit of a problem.

You see, the headline doesn’t quite match the actual quote in the story. Rather than delivering on their big tease with a blustering rant about destroying Israel with a hail of newly-minted nuclear weapons, Ahmadinejad’s quote in paragraph eleven of the story comes across a bit differently:

“We don’t even count them as any part of any equation for Iran. During a historical phase, they (the Israelis) represent minimal disturbances that come into the picture and are then eliminated.”

In the story, that quote follows a number of other quotes responding to questions about the possibility of an Israeli attack on Iran, to which Ahmadinejad offers a number of dismissive responses and some blustery posturing about Iran’s centuries-long history and fearlessness in the face of these threats:

“Fundamentally we do not take seriously the threats of the Zionists,” Ahmadinejad, in New York for this week’s U.N. General Assembly, told reporters. “We have all the defensive means at our disposal and we are ready to defend ourselves.”

“We do believe that they have found themselves at a dead end and they are seeking new adventures in order to escape this dead end. Iran will not be damaged with foreign bombs,” Ahmadinejad said, speaking through an interpreter at his Manhattan hotel.

Put into the context of the full interview and, even more alarming, taking the actual quote referenced by Reuters in their sexed-up headline, it seems that Ahmadinejad is referring to threats made by Netanyahu and that Iran, which, sadly, he is speaking for in this interview, simply “eliminates” the “minimal disturbances that come into the picture” regarding the threats being made against it. It sounds like Ahmadinejad is saying he disregards the threats being made.

That has far different implications than those stated in Reuters’ eye-grabbing headline. And with the talk of war at a fever pitch, and the tension in the region rising faster than a Predator drone on take-off, it might be more important than ever for a much-respected news source to pay close attention to these details.

Perhaps something was lost in translation. But the alarming part of this is that we are not comparing quotes from various sources. No, the misquote featured in the headline is misquoting a decidedly less incendiary quote found in the story itself!

This is not a small matter, particularly when it comes to Iran, Ahmadinejad, Israel and the hurly-burly of Middle East diplomacy—and the role news plays in shaping public opinion as nations dance on the precipice of war.

Reuters takes this fast and loose word game even further by following up the quote in question with this little remark:

In 2005, Ahmadinejad called Israel a “tumor” and echoed the words of the former Iranian Supreme Leader, Ayatollah Ruhollah Khomeini, by saying that Israel should be wiped off the map.

Apparently, the folks at Reuters haven’t been reading newspapers.

Why? Because he never actually said it.

This misquote, which entered the public’s consciousness in 2005 and been repeated ad infinitum by politicians and war advocates, has been thoroughly debunked by Professor Juan Cole and a real, live Farsi speaker at the Mossadegh Project. In fact, the story was featured in the October 05, 2011 edition of the Washington Post—hardly an obscure or little-read news source.

Even more damning, Dan Meridor, Israel’s Deputy Prime Minister and Minister of Intelligence and Atomic Energy, admitted in an interview that Ahmadinejad did not call for Israel to be “wiped off the map.” This story in the New York Times ran on April 17, 2012 and in it the infamous misquote is debunked yet again:

Mr. Meridor said that Mr. Ahmadinejad and Iran’s ruling cleric, Ayatollah Ali Khamenei, had said repeatedly “that Israel is an unnatural creature, it will not survive. They didn’t say, ‘We’ll wipe it out,’ you’re right, but, ‘It will not survive.’”

But that still doesn’t quite get there. According to Cole and the Mossadegh Project, the translation of Ahmadinejad’s “original statement in Persian did not say that Israel should be wiped from the map, but instead that it would collapse.”

And all of this well-established debunking was lost on the folks at Reuters as they simply compounded an ongoing error with a brand new, attention-grabbing error of their own creation.

This is not meant as a defense of Ahmadinejad or the Iranian regime. Obviously, Ahmadinejad says plenty of incendiary and outrageous things all by himself. He doesn’t need to be misquoted to look like a lunatic.

But accurate news and precise translation are so critically important in matters of war, of diplomacy and to the future of those who would die if the rhetoric finally escalates beyond misquotes…to missiles.

A few words are not the only thing that might get lost in translation. How unfortunate it would be if tens of thousands of lives were lost as well.

'Reuters and Ahmadinejad: Anatomy of a Dangerous Misquote' have 23 comments