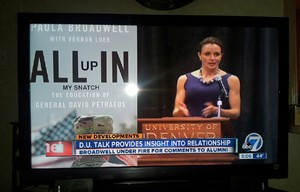 ABC Denver misnamed the biography of former CIA director David Petraeus. The book is actually called “All In.”

Here is my play-by-play of a bizarre, yet quite telling day in the Petraeus Clusterf#ck:

7:26 AM: “Omnishambles” named word of the year by Oxford English Dictionary

8:31 AM:  Confirmed: ABC Denver misnames Petraeus book, “All up in my snatch”

12:18 PM: “Ms. Kelley, who helped organize social events at MacDill Air Force Base in Tampa, Fla., said she received emails beginning around May that she viewed as harassing, and reported them to the Federal Bureau of Investigation in Tampa.” – WSJ

Kelley herself seemed mystified as to what was behind the emails, much less who sent them.

“I don’t know who this person is and I don’t want to keep getting them,” she told the FBI, as recounted by the source.

When the FBI friend showed the emails to the cyber squad in the Tampa field office, her fellow agents noted that the absence of any overt threats.

12:33 PM: “if you are following this petraeus clusterf#ck, you are seeing a classic example of a ‘firewall.’ that is a scandal management technique that attempts to ‘firewall’ public knowledge of the scandal at a point that titillates and obsesses the MSM, but keeps the real depth of the scandal from coming to light. i guarantee that this is not about infidelity. the basic infidelity story is the firewall. but the firewall is collapsing. however, there will be a secondary firewall. and expect a new fall guy and/or gal.” – newsvandal

12:54 PM: Questions from La Figa: “when did shirtless fbi guy contact cantor? and do we believe Broadwell about prisoners?”

newsvandal responds: “two weeks ago. i don’t know what to believe, but it is a BOMBSHELL claim to make…and it is amazing that it went NOWHERE, considering who she is, was and had been embedded with (in the platonic sense of the word). i would say that we will hear much more later. the tyranny of the lawyers is now in play…say nothing, do not incriminate yourself, etc. but i believe that petraeus was “taken out” to firewall the deeper scandal…whether it is prisoners, exporting revolution to syria (maybe even mali?) or both issue: prisoners and syria.”

1:33 PM: something to consider when you think about the petraeus clusterf#ck:  Clinton Goes Commando, Sells Diplomats as Shadow Warriors

A Flowchart of the Petraeus Affair’s Love Pentagon, from the Shirtless FBI Agent to Chuck Klosterman

Pat Robertson Excuses Petraeus: ‘Here’s a Good-Looking Lady Throwing Herself at Him’

2:23 PM: “so, today has been a fascinating study in scandal management. bottom line: the scumbagettes of national security – jane harman and dianne feinstein – have been deployed to beat the drum repeatedly…”there are no national security implications, there are no national security implications” and “this has nothing to do with benghazi, this has nothing to do with benghazi.” btw: they are personal friends of the petraeuses. oh yeah, and the president didn’t know anything until after the election, even though holder knew for months that the cia director was under fbi investigation. uh-huh.” – newsvandal

2:44 PM: “expect the next fall guy to be the ‘shirtless guy’ from the FBI” – newsvandal