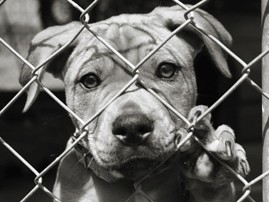 Once again this year, the Westminster Dog Show attracted millions of viewers eager to see which dog will garner the bluest of ribbons.

Also once again this year, millions of discarded and unwanted dogs will be executed in overcrowded shelters, far away from the glaring lights of cable television.

Softened, palatable euphemisms like “put down” and “euthanized” serve only to assuage our guilt and placate our vanity. Even the term “destroyed” offers a clean escape. It depersonalizes the “destroyed” by implying it is just a thing, and not a being.

When we are talking about the staggering numbers killed annually, perhaps we must concoct semantic exit clauses, or else we risk facing the stark reality of our own complicity.

The Humane Society of the United States estimates 4 million dogs and cats are executed each year. It has to be an estimate because the numbers are so large, the process so widespread and the reporting so minimal. That works out to a dog or cat killed every 8 seconds. Of the approximately 6 million dogs and cats that enter shelters yearly, 60% of dogs and 70% of cats will be killed.

This is the dark side of animal breeding.

Meanwhile, the lights shine on breeders parading their prized “stock and trade” around the floor of Madison Square Garden. The eye is fooled, heart strings tugged and our vanity caressed. But complicity is the problem. The grinding machinery of death found at shelters around the country is inexorably linked to the vainglorious displays at the Westminster Dog Show, and at hundreds of lesser dog and cat shows held nationwide.

Those shows, and the breeders they help to sustain, condemn millions of unwanted dogs and cats to a short, distressed and ignominious stay in a crowed county or municipal lock-up before the gas or needle is finally administered.

For each specially bred dog and cat, sold for hundreds and sometimes thousands of dollars, another dog and cat is condemned. For each time a pet is purchased from the dog and cat breeding industries, that is a shelter pet’s hope quickly dashed—hope for a rescue and a family and, at long last, a home.

It is easy to point the finger at the breeders. Particularly vile are those callow profiteers running the gulag-like puppy mills that feed consumers’ insatiable desire for animal accessories, fad breeds and future drop-offs at the local pound. According to a startling exposé by the New York Times, the venerable American Kennel Club often sells off its “A.K.C.” seal of approval without much in the way of oversight or concern for the welfare of dogs. Their primary concern is the business of breeding, which is not surprising. Dogs are often kept in horrific conditions, stuck in small cages and never allowed to run, their sicknesses untreated and their lives reminiscent of livestock at factory farms. There is a reason they are called “puppy mills.”

Of course these are the horror stories and some A.K.C.-certified breeders work hard to be known as “responsible breeders.” But the question remains: Is it possible to be a “responsible” breeder when millions of unwanted dogs are killed each and every year?

The small, caring breeder is, just like the “high-volume breeder,” plying his or her trade to meet growing demand and, despite periodic stories of shocking mistreatment and abuse, that market grows and grows as dog shows and celebrities parade around the latest  in “cute” and “cool” and cuddly. A dog carried by a celeb or a touted at Westminster is little more than a consumer product meant to appease the stylistic preferences of the impulse buyer.

Breeders and buyers must face facts. Simply put: each dog purchased is taking the place of a dog that can be rescued. It is a one-for-one proposition. A dog bred and sold condemns another dog to death.

The same applies to cats, their breeders and the shows they also indulge in. Feral cat populations swell each mating cycle and, because many cats are free to roam their neighborhoods without being spayed or neutered, millions of unwanted kittens and cats are also executed, their short, brutal lives often punctuated with a sad disposal at a landfill. There are cats languishing at your local Pet Smart right now. But still people breed and inbreed hairless cats because they are “cool” and quirky.

If, indeed, the desire is to acquire a companion, is there any justification possible for buying a bred animal? A strong case can be made for “working dogs,” those breeds best suited to herding, guiding the blind, police and rescue work. However, beyond that specialized need, there is no good, ethically-sound reason for buying a dog or cat when so many are about to die. Right now. Today.

All else is mere vanity.

A dog or cat acquired for some ephemeral, esoteric or stylistic reason is nothing more than a vanity plate for a car, the latest handbag or some other banal consumer expression of “who I am as a person.” Chihuahuas, bulldogs and pit-bulls all sit atop the list of the latest “in” things. But down at your local shelter there are dozens upon dozens of dogs who also sit atop a list—a list of those about to be killed and discarded with no one to mourn their passing. Some are from the very “in” breeds that saw their “novelty” quickly wear off as the realities of upkeep and responsibility rendered them unwanted and disposable.

Once again this year millions will cheer on the latest “champion” of Westminster, its owner and breeder ready to reap the rewards of a dog well-bred. But there will be no reward for those dogs without “papers” or hope. They will wait in vain for a home until the inevitable arrival of the reaper.