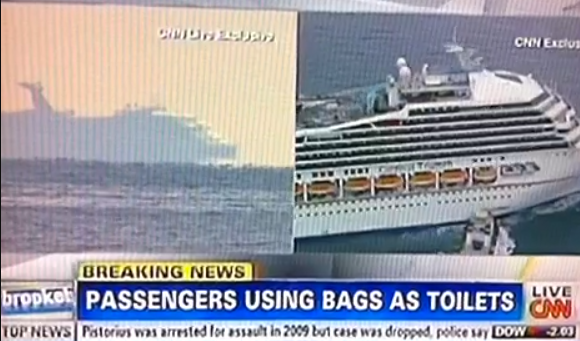 If he was, there is a good chance he had his heart broken.

Because February 14th, 2012 was the day CNN, the once-venerable and omnipresent newsgathering machine, officially kicked off the Jeff Zucker Era by dropping its anchors in the salty brine around the Poop Ship—the disabled, infamously sewage-laden Carnival Triumph cruise liner.  And they left their flagship “news personalities”—along those lethargic, easily-entertained viewers willing to endure them—locked down on the long, drawn-out towing of the Triumph back to port…for nearly 12 hours! Even worse, they touted this sad attempt to squeeze blood from a turnip as a “CNN Exclusive” and “Breaking News.”

To be fair, watching the wall-to-wall coverage of this mostly-irrelevant story did give viewers a sense of what it must’ve felt like to be trapped in a confined space, dodging streams of sewage and completely shut off from the rest of the world. Because that is what the post-AOL/TimeWarner Era has been like at CNN—a slow, steady decline into the equivalent of a bad cruise, featuring subpar entertainment, self-promoting cruise directors and a steady diet of empty calories that fatten both the belly and the mind.

That’s what we got from CNN. In fact, that’s all we got.

CNN’s “hosts” filled the relentless emptiness with repetitive blather under a mind-numbing wide shot of the slow-moving ship. The process began with Ashleigh Banfield and Brooke Baldwin, through the “shows” of Wolf Blitzer and Erin Burnett, and then onto a painful-to-watch finale “anchored” by Chris Cuomo in which he conducted a series of stilted phone interviews with people clamoring to disembark from the Triumph.

It is important to remember that these people are hosts, not journalists. They host shows, much like cruise directors host cruises. At one point, Erin Burnett teased a segment featuring the well-coifed and perpetually-tanned Donny Deutsch leading an “All-Star Panel” ready to “weigh-in” on the Poop Ship.

That’s right, America. The self-described “Most Trusted Name in News” tossed to a panel of blatherati filling an echo chamber with “insights” and opinions about a disabled cruise ship.

This is not a joke. But their coverage is.

This cable news emperor has been parading around for some time without much clothing. And their hind-quarters are not the only thing lacking coverage. Here are just a few stories CNN could’ve covered that day by deploying real journalists out in the real world digging up real news:

Instead, CNN gave us Martin Savidge comparing the travails of the Poop Ship’s passengers to those suffered by the victims of Katrina. Savidge is a veteran reporter, but years inside the news bubble have taken a toll. Both his network and the news business have totally lost touch with the reality of real news as they’ve devolved into a pale reflection of reality television—one that people don’t really trust or watch in significant numbers.

The painful fact is that CNN, and the rest of the American broadcast news business, covers less and less news with each passing year. Less actual reporters and less working bureaus equal less actual reporting on fewer stories from fewer places around the globe.

Instead, we’ve gotten more and more personality-driven drivel. The transition from reporters in the field to hosts in the studio began with OJ and ended when Monica-gate finalized the Clinton Era shift from the costly enterprise of original reporting to the cheap and profitable business of letting “personalities” and pundits in the studio simply bloviate about re-hashed wire reports on sensationalized scandals, titillating tragedies, political ping-pong, major weather events and tiresome celebrity blah-blah.

The AOL/TimeWarner merger enshrined in perpetuity the gassy news bubble that surrounds America. Bureaus in Europe, Asia, South America and various notable capitals around the world—all were lost as the talking windbags took over at the 24-hour news networks.

Wars get covered, so long as the shocking, awe-inspiring pictures keep coming. Once those initial explosions give way to complicated gray areas, civilian deaths and troubling blowback, the wars suddenly become too costly to cover and too complicated to explain to “Joe Six-Pack.”

Although natural disasters remain a mainstay of cable news coverage, the deeper stories of environmental degradation and looming crisis require actual knowledge on actual science and the willingness to go to places and talk to people in ways that cannot be easily explained by an “All-Star Panel” of blatherati.

And now that Jeff Zucker is on board, expect more of this incredibly cheap to produce, reality-styled programming from the network formerly known for news. The man who had a knack for “failing upwards” and gave us the Katie Couric’s self-titled talk show is likely to go full steam ahead into the iceberg of irrelevance Paddy Chayefsky warned us of back in 1976.

In Network, Faye Dunaway plays Diana Christensen, a voracious programming executive who lusts after the control of the news division. She gets her wish, transforming news into the sort of infotainment becoming so commonplace today. Now life imitates art, with Zucker, the programming executive as news ratings savior, “re-booting” the Love Boat franchise in real time. With a “newsy,” scatological twist!

Perhaps that day Ted Turner was out where his buffalo roam and didn’t see his once-grand experiment go down with that ship. However, Ted, like us all, should be mad as hell about it. Democracy simply can’t take it anymore.