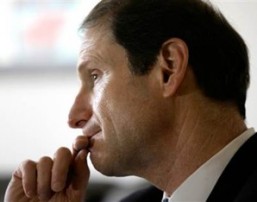 Take a long look at Senator Ron Wyden of Oregon. He may be the last of a dying breed.

Senator Wyden is a Democrat.

He’s not a New Democrat. Or Blue Dog. Or an electorally-adept Reagan Democrat in progressive clothing.

Most importantly, he is not a willing functionary of the Corporate Imperium™ that passes itself off as the two-party system.

Senator Ron Wyden actually adheres to both the small “d” and the capital “D” versions of the democratic tradition—of protecting civil liberties, preserving the separation of powers and questioning unchecked militarism. These Ghosts of Democrats Past still haunt the dreams of reflexive voters, of party loyalists and of hungry progressives everywhere.

But they are ghosts. Faint illusions and lingering specters.

Those indelible images of Henry Wallace and RFK, Eugene McCarthy and George McGovern, Paul Wellstone and Robert Byrd, and, hold your breath, the ever-more prescient Jimmy Carter—they are bitter reminders of the Democratic Party we wish we had…and of the party so many still think they are voting for every two and four years.

Those ghosts were finally exorcised during Rand Paul’s teachable moment. The drone policy filibuster not only exposed the fading luster of Constitutional guarantees, but it also laid bare the worthlessness of the Democrats as an alternative to the Imperium.

Only Senator Wyden came to the floor to speak in defense of due process, the Bill of Rights and the rule of law. Only Senator Wyden stood up to the prevailing orthodoxy of his own party and its growing adherence to corporate-military tropes, its use of jingoistic platitudes and reliance on military Keynesianism.

Senator Wyden’s presence in the filibuster stood in stark contrast to those who were absent. Where were the so-called “liberals” like Boxer, Mikulski, Brown and Franken? Or the Blue State doyens like Feinstein, Schumer and Stabenow?

None came. Only Harry Reid and Dick Durbin showed up, charged with the task of derailing the question: Can the President kill Americans without due process?

But Rand Paul droned on and on, exposing the rift within his own party and highlighting the loneliness of Wyden the Democrat.

Senator Wyden is stuck in the “Good Cop” party. Its persistence is wholly dependent upon the palpable fear of the Republican “Bad Cop.” And each side uses these roles interchangeably during elections. The fear of what the other cop will do when it gets you alone in the interrogation room—that is the self-perpetuating game they play with us all. But the Imperium is the only true winner.

The Corporate Imperium™ found its great “Left” champion in Bill Clinton. He and his Democratic Leadership Council (DLC) changed the party forever, eagerly attaching their strings to the financial and defense industries.

Entering the vacuum left by the last gasp of Massachusetts liberalism, Bubba quickly erased the image of Dukakis’ bobble-headed ride into the electoral tank. Clinton methodically altered the Left-Right paradigm by co-opting key parts of Reaganomics and preserving Iraq as a future target of opportunity.

He was not anti-war. In fact, he was pro-missile, pro-bombing and pro-intervention. Bill quickly signaled his acquiescence to military-industrial complexities when he quietly ended the investigation into Iraqgate—a long-since forgotten scandal embroiling some of the future architects of the War on Terror in a criminal investigation. Imagine the disgrace of GHW Bush’s administration illegally arming Saddam prior to the invasion of Kuwait!

Well, your imagination will have to suffice.

Bubba, the future darling of Barbara and the Bushes, pulled the plug on Iraqgate before it could do any real damage. Don’t stop thinking about tomorrow was all-too often predicated on quickly forgetting the past.

The “era of big government was over,” and the era of the Wall Street Democrats was nigh. But the Clinton Years’ greatest achievement was the repackaging of pro-corporate, pro-defense industry, pro-Wall Street and anti-welfare policies as “the Left” and “liberal” and “progressive.” Like hostages suffering from Stockholm Syndrome, Democratic voters still love their first captor. But he handed over the keys to that prison when he spoke for Obama at the 2012 Democratic Convention.

Now they find themselves embracing a President who has moved the bar in ways Dick Cheney only dreamed of—indefinite detention of Americans, expansion of US forces to oil and resource-rich countries around Africa, and a never-ending drone war against “suspects” and “latent enemies” everywhere.

Calling Obama a “socialist” actually makes some sense in this post-Clinton paradigm. It reflects the confusion of Republicans who’ve been pushed from conservative into reactionary as the Democrats have moved further and further to the right. In comparison, Clinton’s supposed “liberalism” made actual liberals look like latter-day Che Guevaras.

The “socialism” tag also preserves the vague notion that self-described liberals can sift through the ashes of this new Democratic Party and find the embers of progressivism and civil libertarianism still burning beneath the failure to prosecute Wall Street, to protect the environment or to truly and finally end the War on Terror.

If Obama is a “socialist,” imagine where Wallace, RFK, McCarthy and Carter would be on this new, re-imagined “Left-Right” spectrum!

They’d be where Ron Wyden stood alone during the filibuster, advocating values once thought to be the sole provenance of the Democratic Party. Perhaps the most notable fact to emerge from the filibuster is that civil libertarians on both sides are the people pushed to the margins in today’s Washington.

The consensus in the “political middle” is the same consensus that gave us the Patriot Act, the War on Iraq and the expanding, vaguely-defined “third war” being waged by remote control around the globe.

Do you want bipartisanship?

The Corporate Imperium™ is the new bipartisanship.

'The Last Democrat Standing' have 3 comments