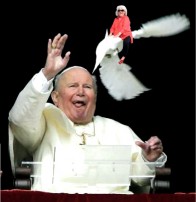 A serious-looking Matt Lauer asked serious-sounding questions to a thrice warmed-over celebrity chef. He probed and prodded her about her character, her life and her use of “hurtful” language—also known as “the N-Word.”

The beleaguered belle was much obliged.

Ms. Deen offered up her tearful best to placate the masses and to salve the wounds inflicted on her business partners and brand identity.

And, sadly, this celebrity chef is gonna keep on apologizing as long as the media gives her airtime. Of course, the “news” media is gonna keep on blathering about her—as long as she keeps chumming their waters with her suddenly bleeding heart.

American “culture” and “society,” such as it is, has actually created dozens of “celebrity chefs.” We’re not talking about the latest incarnations of Julia Child—passionate advocates who are motivated to literally teach people how to cook.

Celebrity chefs are now such a cultural phenomenon that Bloomberg TV actually sat them around a table and asked them: “What’s it like to be a Top Chef on TV?”

For those in search of empty calories, this celebrity-driven drivel is always on the menu at Food Network.

They made Paula Deen. And, by turning her Southern-fried lifestyle and oversized personality into a TV show, they turned adult-onset diabetes into a spectator sport.

When Food Network gave us Guy Fieri, it answered the question: What would it be like if Sammy Hagar drove a taco truck?

And when they launched their “Next Food Network Star” franchise they asked Americans the ultimate question: Don’t you want to be Paula Deen or Guy Fieri?

Really, doesn’t everybody want to know “what it is like” to be a “top chef” on TV?

Food Network has leveraged America’s celebrity obsession into an overcooked onslaught of personality-centered, competition-heavy programming. Frankly, the food is beside the point. They’ve co-opted the most elemental human endeavor—the preparation and eating of food—and turned it into a voyeuristic carnival sideshow of sword swallowers, fire eaters and self-promotional barking.

And “the people” just seem to eat it up. Last year, Food Network hit an all-time high of over 1.1 million viewers per night. That’s FOX News territory!

Michael Pollan, the Quixotic evangelist of preparing and eating actual food, points out that the average American now spends more time watching people cook on TV than they do cooking for themselves.

Perhaps the reason Americans prefer to watch celebrities cook and eat and talk about food is the simple fact that Americans are addicted to celebrity. Celebrities are the saints and demigods of American consumerism run amok. They are both consumer products and spirit guides, showing the way through the valley of social media darkness into a promised land of hype, attention and perceived relevance. Marx said religion is the opium of the people, but that was before television could transform people into a drug-like cult of grotesque personalities.

In reality-themed America, the Horatio Alger story has been replaced by The Apprentice, The Biggest Loser and Survivor: Altoona. In the absence of any real progress in politics, economics, education or, it seems, even human evolution, the last hope for a growing population of also-rans is to dream about becoming famous.

The incessant machinery of reality television has churned out celebrity duck hunters, pawn shop owners, fishermen, ice truck drivers and real estate agents. Even better (or worse), it has fixated on callow and shrill self-promoting D-Listers like the Kardashians, turning them overnight into full-fledged public figures. Without any talent, ability or even jobs, they have leveraged a sex tape into a virulent and inescapable brand of celebrity that not only rejects shame, but embraces it as a marketing strategy.

Of course, there is money to be made in this new shamelessness. But, as America becomes more polarized between an elite group of haves and teeming masses of have-nots, it seems that fame itself is the new American dream.

To wit, Forbes Magazine actually publishes an annual “List of The Most Powerful Celebrities.” As they make clear, “…our annual Celebrity 100 takes a stab at measuring that most ephemeral of riches: fame. Yes, we factor in celebrity earnings over the last 12 months, but we also tally how often each celebrity is mentioned in print and on TV, and gauge the strength of their Internet presence and how they’re viewed by a critical constituency: American consumers.”

Of course, Oprah is the “most powerful” celebrity. She made her career by providing a safe place for famous people to wallow in their ephemeral riches. But celebrity chef Rachel Ray and sex tape star Kim Kardashian also made the list—and, therefore, hope springs eternal.

Be comforted, American dreamers. Shame is the only thing standing between you and your arrival as a full-on cultural reference. So, make a sex tape. Try out for a reality competition. Transcend the plight of the anonymous. Maybe you are the next “Food Network Star.” Eventually, you can end up apologizing on the Today Show or, if your fall from grace is epic enough, genuflecting at Oprah’s altar of celebrity power.

If nothing else, you will be guaranteed the “ephemeral riches” of fame as you tally “celebrity mentions” across all media platforms. And you will have escaped the real world fate of millions of people who distract themselves and each other by clamoring to mention you first.