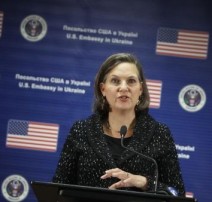 I’ve got two new stories on the subtle partnerships behind the scenes of U.S. policy toward Ukraine and Russia.

The visible maneuvering over Crimea and the Cold War nostalgia expressed by belligerent U.S. politicians doesn’t quite match the corporate takeover we saw in Iraq. Rather, it feels more like Guatemala & the United Fruit Co. in 1953, or Iran & the CIA in 1953.

The moves are happening on two fronts: energy and agribusiness.

To read my story on Condi Rice and Chevron’s new 50-year lease to develop shale gas in Ukraine go to BuzzFlash: The Business of America Is Giving Countries Like Ukraine the Business

Excerpt: Like most American Exceptionalists, Condi Rice’s bluster and posturing can be reverse-engineered to find the banal truth about U.S. foreign policy. For example, her steadfast belief that Ukraine “should not be a pawn in a great-power conflict but rather an independent nation” might have something to do with Chevron’s 50-year lease to develop Ukraine’s shale gas reserves.

When that lease was signed on November 5, 2013, it stoked Russian fears about losing its influence on, and a major gas market in, a former satellite. It also came on the eve of the much-disputed trade deal with the European Union that, once abandoned due to Russian pressure, led to the toppling of Ukraine’s government. Reuters characterized Ukraine’s “$10 billion shale gas production-sharing agreement with U.S. Chevron” as “another step in a drive for more energy independence from Russia.”

To read my story on growing investments by Cargill, Monsanto and Big Ag in the Soviet Union’s former breadbasket go to Consortiumnews: Corporate Interests Behind Ukraine Putsch

Excerpt: Despite the turmoil within Ukrainian politics after Yanukovych rejected a major trade deal with the European Union just seven weeks earlier, Cargill was confident enough about the future to fork over $200 million to buy a stake in Ukraine’s UkrLandFarming. According to Financial Times, UkrLandFarming is the world’s eighth-largest land cultivator and second biggest egg producer. And those aren’t the only eggs in Cargill’s increasingly-ample basket.

On Dec. 13, Cargill announced the purchase of a stake in a Black Sea port. Cargill’s port at Novorossiysk — to the east of Russia’s strategically significant and historically important Crimean naval base — gives them a major entry-point to Russian markets and adds them to the list of Big Ag companies investing in ports around the Black Sea, both in Russia and Ukraine.

Both stories touch on the “Deep State” of interlocking interests, political fixers and policymakers steering U.S. policy into a long-desired collision with Russia. Ultimately, it’s about opening the door to Ukraine’s resources for well-connected corporations.