Everything you need to know about the trouble with US foreign policy is right here in this headline from OilPrice.com:

“Venezuela’s Demise Is A Geopolitical Litmus Test For The U.S.”

Let’s break it down…

1. Why is “OilPrice” pondering US geopolitical posturing and “diplomacy”? Yup … it’s the ka-ching!

2. Notably, it is just taken as a given that Venezuela’s internal crisis is America’s business … in every sense of the word.

3. Somehow, the way the US manages another country’s affairs and/or decline is a “litmus test”! Uncle Sam is always being tested in other countries, right? #exceptionalisnt

4. Frankly, It shows once again that it’s been all about the oil ever since Uncle Sam nuked civilians at Hiroshima 72 years ago. The Cold War, regime changes in Central and South America and Indonesia and in Africa, the use of the Middle East as a bombing range for nearly 30 years, the enlisting of brutal “non-Commie” proxies around the world … the whole damn thing has just been about a small group of people finding ways to make money off of other people’s resources.

4A. Now, I know it is not quite that simple … but, actually, it is that simple. All of the other money-makers like defense are spin-offs and two-fers emerging from the core mission of US foreign policy since the end of WWII … which has been to organize the nation around the tantalizing wealth potential of hydrocarbons. And the US defense budget (a de facto oil industry protection racket) has been the single greatest subsidy ever given to an industry that has been awash in subsidization from a wide array of agencies and policies.

In fact, The Guardian had a story on the same day with this starling title: “Fossil fuel subsidies are a staggering $5 tn per year” … which is another way of saying we are all paying the Oil-Industrial Complex big bucks for the privilege of being charged a premium for their product. They have an enduring vice-grip on policy, as evidenced by their triumphant takeover of the Trump administration through key cabinet positions that will generate big returns for corporate interests and their Middle Eastern allies.

All I’m really saying is that America’s empire is stuck and its leaders are stuck and the economy is stuck because the whole f*cking thing has been predicated on this one immutable principle: Oil Uber Alles. But now the jig’s up. Peak Oil turned into Peak Demand. The oil market is entering prolonged secular stagnation. Mother Nature’s market correction (a.k.a. climate change) is finally collecting on long-piled up environmental debts with costly climatic and ecosystem disruptions. And decades of mis-allocated capital into Military Keynesianism (to mostly protect oil interests) has forestalled a long-overdue transition into a post-industrial economy and created a permanent underclass in the process … even as China builds roads and robot factories for its well-planned future.

Let’s face it folks, the empire of oil simply cannot last and I think we are hearing its death rattle all around us. Trump is just the loudest noise drowning out everything else at this particular moment. But there is a far louder cacophony brewing just outside Big Oil’s Beltway bubble. And it won’t sound pretty when it pops. 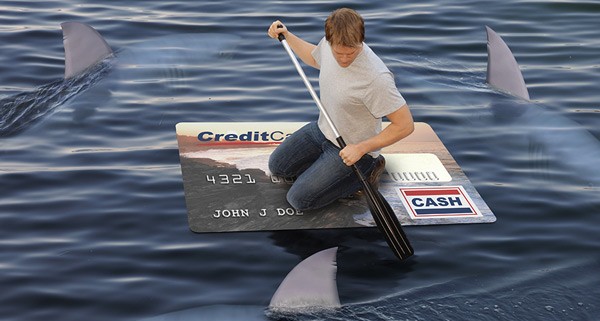 Swimming With the Debt Sharks