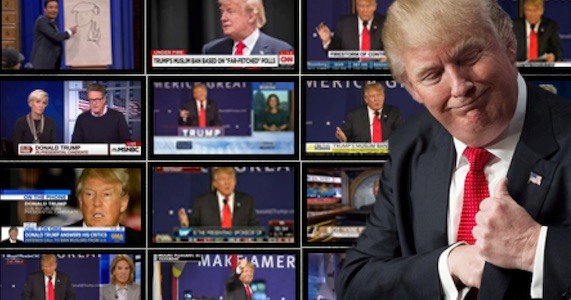 So, I just flipped over to MSNBC and what were they “covering”? Trump’s “stable genius” tweet. And no, they were not “advancing the story”  … that is, if there is a way to advance a stale story based on a two day-old tweet. Instead, they just had a couple talking heads blathering on in pointless speculation about Trump’s state of mind. In other words, they were filling dead air with hot air.

Surprisingly, there is a takeaway from this episode and from the countless hours of Trumped-Up, blatherati-driven coverage churned out by MSNBC, CNN and the three networks … and it’s this: If the so-called “Liberal Media” really is out to “get” Trump … they really suck at it.

Why? Because if I was a managing editor at MSNBC (or CNN or the Today Show or Good Morning America, for that matter) and I was “out to get” Trump … I’d have spent a good three blocks of airtime on former Eli Lilly bigwig Alex Azar. He’s Trump’s replacement for the sleazy, insider trading Dr. Tom Price at HHS. Hell, POLITICO even did most of the work when it published a big story detailing the way Eli Lilly gamed the patent system to sustain Cialis as a rock-hard profit producer when Azar was a Lilly exec. They used a pediatric study loophole the makers of OxyContin had once used to squeeze another six months of profits out of their drug.

Why not hone-in on THAT story? It’s Eli Lilly, for chrissake! They are right there with Monsanto as a name that inspires groans and occasional vomiting (along with a voluminous list of quite real side effects). Even better, Azar is another in a long list of crony-baloney capitalists who’ve turned the Trump Administration into one of the most corrupt cash machines I’ve ever seen. But what is MSNBC talking about? A senescent tweet.

But no … they are poring over the cheap and easy regurgitation of kooky tweets. They are wringing every last drop out of Michael Wolff’s book. And they are forever circling around meaningless details about Russiagate that not only DO NOT advance the story, but ultimately make it look like they are ginning-up stories when, in fact, they actually don’t know what Mueller knows … even as they piss away precious hours of airtime speculating about “what’s coming next.”

Fine, I get it. If you get a leaked detail, you report it and talk about it for a few hours … but then you MOVE ON to Trump’s growing ownership of an ever-bloodier War on Terror or to food safety or environmental collapse or to growing consumer debt or to Trump’s retinue of corporate shills like Alex Azar. You look at the policies that are being made each and every day and the quite real consequences that will come of these often-major shifts.

The upshot is that you’d not only be doing real damage to Trump’s presidency … but you’d also be doing ACTUAL JOURNALISM! You can “get” Trump and do your job, too! It’s a two-fer! Everything else is just an easy way to maintain the profitability you could only dream of before that 24/7 star of your predictable little daytime drama came down that godforsaken escalator in his monomaniacal search for the one thing you give him in spades — airtime.