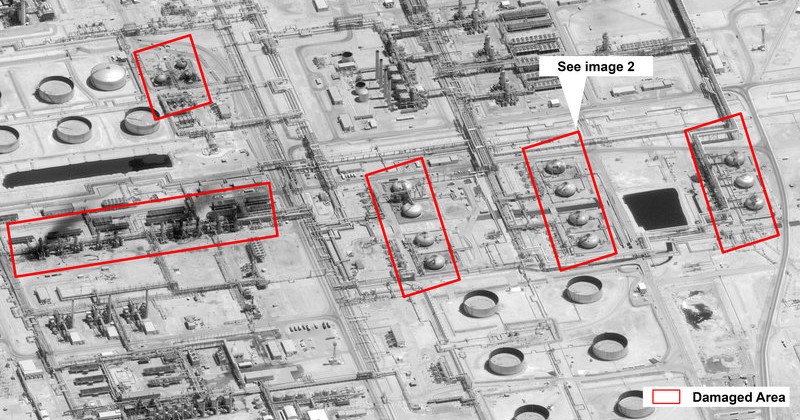 I’m not saying it wasn’t Iran. There is a plausible case to be made that Iran senses the US is being led by a narcissism-addled nimrod who is desperate to avoid war because he needs to be reelected to avoid criminal prosecution. The argument would be that they took advantage of Trump’s striking weakness (see N Korea) to punish the Saudis for being terrorism-supporting pricks who literally get away with murder and have used Trump as a literal tool to cut off their Saudi-dwarfing combo of oil AND gas and starve them of much-needed revenue.

What I am saying is, thanks in no small part to the lingering effect of the miasma of doubt and disinformation that accompanied yet another Saudi-linked event (9/11), that we may never know what the fuck happened … just like the tanker attacks, which, if you’ve noticed, the UAE ultimately refused to pin on Iran and which faded away as the fact pattern amounted little more than shadowy doubts and inconclusive speculation.

Right now, unnamed US officials are telling major news orgs that the attack originated from southern Iran and that they are reconstructing the path of the attack from radar data so they can … give us a fancy animation to convince us?

Not sure how they will explain the Houthis taking credit, although that can be explained away as a misdirection ruse by Iran via their proxies. But why?

And that’s my point.

We ALL KNOW that the “cui bono?” question logically and neatly leads to one answer: Saudi Arabia. They are struggling to cope with a long-term glut, the IMF recently put their break-even price for a barrel of oil at north of $80 (because of larger state budgetary concerns) and they are an international punch-line with a lawless leadership that just happens to own the US president … and everyone knows it.

They, too, are looking ahead to 2020 and see a Trump loss as a major blow to their future prospects. Maybe they want to get what they can before Trump flames out? Maybe they fear a return to the Iran Nuke Deal, loosening of oil sanctions and/or a long-overdue distancing in the relationship between the US and the Kingdom … which Obama started with baby steps, but even those small moves led to a major backlash and the Saudis offering to use an Israeli “Cambridge Analytica-style” firm to meddle in the election of Trump’s behalf.

Basically, the Saudis need the US like Trump needs sheep-like Evangelicals to worship him like a golden calf. Mostly, the Saudis need Iran’s oil & gas to stay in the ground for as long as possible. Anything that addles Iran is in their interest. There’s plenty of “bono” for the Saudis. Finding the “cui bono?” for Iran is trickier.

So, where does that leave us? Maybe nowhere. Amazingly, the market is so glutted that the oil price spike lasted just a day. And Trump may be be nuts, but everyone … including the Pentagon … knows that war with Iran is not winnable. It’s not a crippled bombing range like Iraq was when the US went in and essentially beat up a kid in a wheelchair … but lost anyway.

The upshot might be that nothing is done and the imperial partnership of the vaunted US military with their infamous Saudi schemers is exposed as hamstrung in the face of a brazen attack on the world’s third most expensive military. If that’s what happens … nothing, that is, other than sanctions or a pin-prick strike on an airfield … that fact may point to the one possible “cui bono?” for Iran that makes sense of this clusterfuck.

'What the Hell is Up with the Saudi Arabia – Oil – Drone Attack Thingy?' has 1 comment