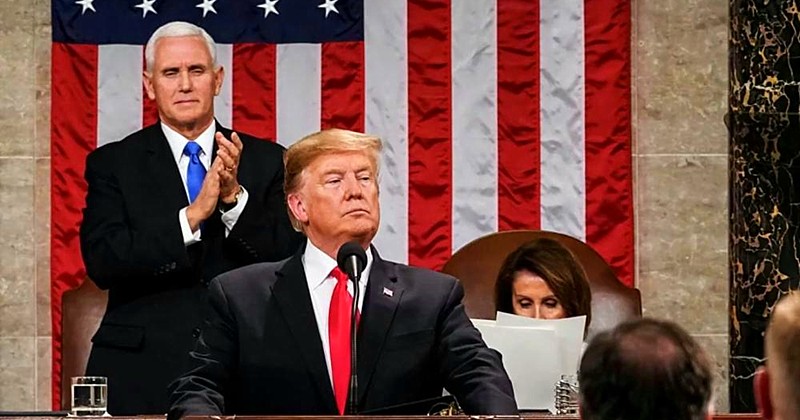 As I predicted yesterday, Trump launched the second part of his Reagan Reboot last night with a mendacious sales-pitch for reelection rooted in his trumped-up version of Morning In America.

With the Fed’s low rates and its willingness to artificially inflate the market through the Repo Loan ATM machine … and with investors unwilling to look at fundamentals for key tech “superstars” like Tesla … this supply side/sugar high economy, which mirrors the tax-cut/deregulation-stoked economy Reagan rode to a thumping of Mondale, will also be sustained by Trump’s heavy dose of Military Keynesianism (just like Reagan before him).

Back in ’84, that same witch’s brew generated a 49-state landslide over Mondale as Reagan’s “voodoo economics” miracle expanded his ideologically-minded base deeper into blue collar territory and tightened his grip on the suburbs.

At the same time, Mondale was painted as a pie-in-the-sky/government-loving liberal by a culture war-based conservative machine that DID NOT have FOX News, psyop mirco-targeting or the disinformational scrum of social media at its disposal.

All that’s left is for Trump is to cast the role of his pie-in-the-sky opponent and, according to a story I posted yesterday, the GOP in South Carolina is working to mobilize Republicans to vote for Bernie Sanders in the primary that follows New Hampshire. It’s a tactic pioneered by Rush Limbaugh, who Trump adorned with the Medal of Freedom during last night’s infomercial for his second Reagan reboot.

'SOTU: The Reagan Reboot Strikes Again' has no comments