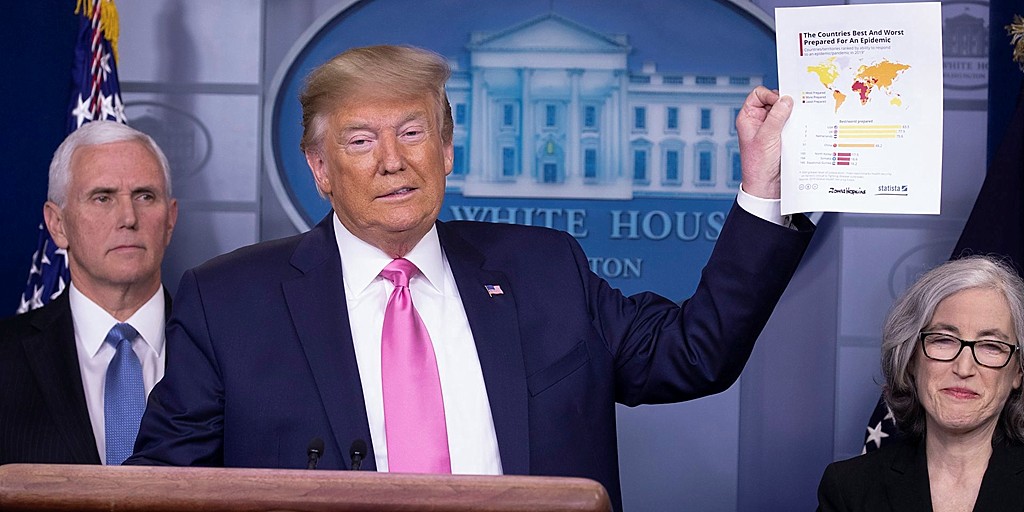 As COVID-19 begins its inevitable “community transmission” phase around the United States, the purveyors of the conventional wisdom are largely focused on President Trump’s (and by extension, prayerful Vice President Pence’s) incompetence and his self-serving, empathy-free approach to the coronavirus. And it is true that, as with all things Trump, it seems that all he really cares about is the stock market and its effect on his reelection bid. But Trump’s narcissism obscures something both far more pernicious and far more permanent than his oft-televised obsession with himself … and that’s the fact that he’s been busily making Milton Friedman’s “Supply Side/The Bottom Line Is The Only Line” dream an intractable reality.

It was a dream that first took flight when Ronald Reagan was elected in 1980. The dream was often made manifest by the neoliberal lurch and deregulatory impulses of President Bill Clinton. But it is Trump who’s come closest to fully realizing the dream of ending responsive government. It should come as no surprise, though. Trump lifted, among other things, his “Make America Great Again” slogan from the Gipper. He’s also taken Reagan’s anti-FDR pitch about the dangers of government (see “The Deep State”) and, with the help of a motley crew of Tea Partiers, Evangelicals and corporate Republicans, transformed it into, as Steve Bannon calls it, a “War on the Administrative State.”

Since taking office and taking complete control of the news-cycle, Trump has been systematically starving Federal agencies of resources, personnel and attention. He has, through the sycophants and lobbyists he’s installed around the Executive Branch, been pushing out career professionals and barely replacing them with also-rans. And he is dismantling every aspect of government he cannot use to reward his corporate clients or punish political apostates.

The idea is to cripple the Federal government from within instead of doing the hard legislative work of changing the laws that legally compel government action. As a result, many of the regulations on the books are becoming functionally irrelevant. Some laws are being rewritten by the lobbyists who used to lobby against ’em, but mostly the Executive Branch is being systematically emaciated by the political equivalent of chronic wasting disease.

It’s an approach first pioneered by Reagan devotee Grover Norquist, who advocated “starving the beast” of government down to a manageable size before “drowning it” in a bathtub. It’s an idea currently being implemented with wide-ranging effect by Trump, who, like Reagan before him, is accelerating the bankrupting of the already debt-laden treasury with a combo of tax cuts and massive spending on a world-dwarfing defense industry. Eventually, the theory goes, the “safety net,” a.k.a. “entitlements,” and other “common good” spending will collapse under the weight of the financial limitations generated by profuse borrowing to fund market-distorting tax cuts … and to dole out subsidies and tax gifts to cronies and key corporations. All the while, the ever-less regulated chemical, oil, defense, agricultural and (most importantly of all) financial industries will continue to hoard assets through the rinsing and repeating of the supply side boom-and-bust scheme, a.k.a. the business cycle.

Frankly, this all looks like the endgame of a long plan to undo the demand side economy created by the New Deal. Along with the seemingly (but not) contradictory spike in Unitary Executive power (which is about protecting rackets, shielding enforcers from prosecution and about enforcing political compliance), this is a transformation decades in the making … and Trump is the perfect salesman for this final episode … even better than Reagan or Clinton … because his “flood the zone” narcissism is the ultimate, 24/7 distraction for a people addicted to binge watching, inured to scripted reality shows and motivated by belligerent infotainment.

Reagan was the first actor to hit his marks … on a stage set for him by the interlocking forces of Big Oil, Big Defense and Wall Street. Not coincidentally, this same Venn Diagram of power has profited mightily from Trump’s Presidency. Rather than an actor, though, Trump is the barking emcee of the final season of the American Dream Gameshow … a program that was initially cancelled in 1980, but somehow kept running in syndication on one of the two crappy channels a “free” people have been given to chose from. But now, the final credits are closer to rolling that ever before.

As such, Trump is the omega to Reagan’s alpha. And any coronavirus-related “incompetence” you see being reported is a feature, not a bug, of this Re-Great’d America. And that’s because Trump is not an outlier. He is a culmination.