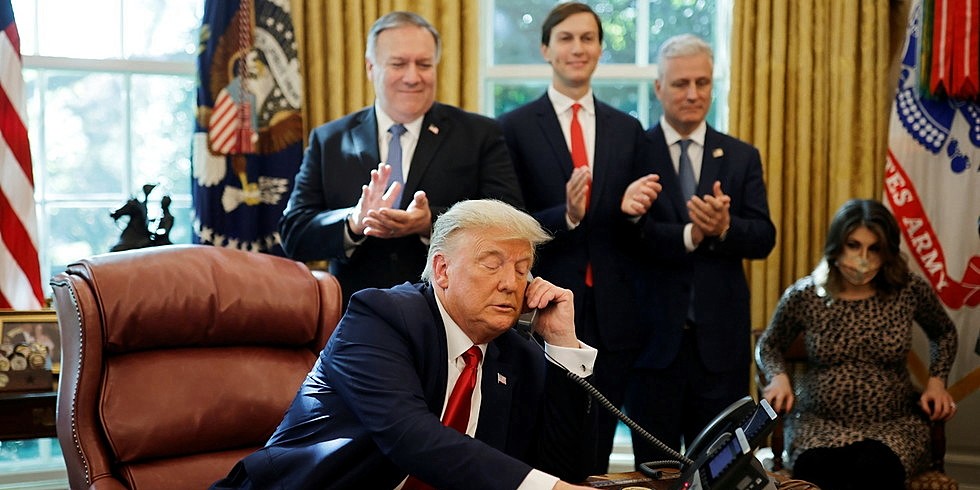 President Donald J. Trump’s peace deal between countries-not-at-war added another buyer when he announced the opening of normalized relations between Israel and Sudan. On its face, it’s a good thing. Sudan got de-listed as a “state sponsor” of terrorism and the US agreed to lift its sanctions on the economically challenged nation. Israel moved a step closer to regional acceptance by adding Sudan to the Abraham Accords. Sudan joins the UAE and Bahrain in ending its official rift with Uncle Sam’s “mighty aircraft carrier,” which now sails in a slightly smaller sea of animosity. And not for nothing, Donald J. Trump got a much-needed PR win entering the homestretch of the 2020 Presidential election.

If only it were that simple.

First and foremost, this deal is about Jared Kushner’s and Bibi Netanyahu’s plan for an “Outside-In” resolution to the Palestinian question. As opposed to the “Inside-Out” attempts of the past, this approach is based on flipping the traditional “Peace Process” on its head. Instead of making peace with the Palestinians (the “Inside”) and then using that predicate to make peace with the Arab world (the “Out”), the idea is to make “peace” with all of the Palestinians’ Arab supporters (the “Outside”) and use that predicate to force the Palestinians (the “In”) to accept a deal because they’ll be too isolated to resist. That’s the “Outside-In” approach Kushner, whose family has a longstanding relationship with Netanyahu, is using to build the Abraham Accords and, in so doing, he’s setting up the Palestinians to accept his proposed resolution to Israel’s military occupation and, through what amounts to a piece-by-piece process, its eventual annexation of significant portions of the West Bank.

To set up this Outside-In foreclosing of the Palestinians’ options, the Trump Administration cut aid to the Palestinians and, during the announcement of the initial Abraham Accord, it is why some of the Palestinians’ long-time Arab financial benefactors suddenly scolded the Palestinians for not going along to get along … with the new shape of things. And this is also why Bibi has such a hard-on for Iran … because Iran is the one power (other than Turkey, which is also a non-Arab regional power) that remains a steadfast, defiant supporter of the Palestinians.

Specifically, they are thinking about Iran’s large oil and even larger natural gas reserves. Add to that Iran’s US-created influence over Iraq, and they could (particularly if not under draconian, Trump-imposed sanctions) make major mischief in the oil market that made the Emiratis and Saudis rich and powerful. Iran is also Saudi Arabia’s main theological rival in the Islamic world. And regionally, they are a major military force … although now Turkey is starting to challenge Iran’s position as the main rival of the UAE-Saudi power coupling.

So, the irony of the “peace deal” is that the Saudis, who are again struggling with an oil glut after enjoying some relief from two-plus years of Trump-stoked oil prices, are banking on its “still in the closet” link-up with Israel to help ameliorate its even more tenuous grip on regional dominance. It’s a grip that has been loosening in no small part because it and its oft-overlooked partner in the UAE have gotten bogged down in military adventures in Yemen (where Iran has supported the Houthis) and in Libya (where Turkey and a motley crew of foreign interests are all jockeying for power and influence).

And now we have this deal with Sudan, which came after Pompeo negotiated a $335 million payout to American victims of terrorism. In an ironic twist given the provenance of 9/11, that payout may have been paid by Saudi Arabia. Either way, the “peace” deal with Israel (which, of course, was not at war with Sudan) was actually a “pay to play” deal that bought Sudan a much-needed normalization with the US. But wait, there more … because over the long haul, this deal could lead to more US weapons sales as Sudan becomes a “partner” of this new regional alliance to isolate Iran.

As if on cue, Sudan has reportedly agreed to designate Hezbollah a “terrorist organization,” thus eliminating a potential obstacle to future weapons’ sales. In fact, that’s the subtext of this whole effort. For the US, this is about selling more weapons in a weapons-hungry region where Russia and China are making renewed efforts to grab more of Uncle Sam’s profitable market share.

To wit, the UAE’s desire to buy into the US Military-Industrial Complex through Lockheed Martin’s F-35 fighter jet was a key concession they sought from Israel for joining the Abraham Accords. Israel had been playing coy … until the Sudan deal was sealed during the campaign event phone call between Bibi and Trump. Shortly thereafter, Israel announced it would drop its opposition to the sale of F-35s to the UAE. Now the UAE has its multi-generational “buy-in” to the Pentagon customer service system and Israel has, by extension, another brick in the wall it’s methodically building around the Palestinians’ slim hope for autonomy.

One fly in this ointment is the growing regional power and assertiveness of Erdogan’s Turkey, which is positioning itself as the new rival to Riyadh. That’s why he’s pushed back so hard on the dismemberment of Jamal Khashoggi. He’s letting the Saudis know there’s a new Pasha in town. Then, of course, there is Russia, which is positioned in Syria and in Libya and is, at the same time, still allied with the UAE and Saudi Arabia in the oil glut-obsessed OPEC+ alliance … with all three oil-dependent powers desperate to prop up the price of oil with production cuts … and no doubt desperate to keep Iran’s oil and, more importantly, its gas off the market.

To add to the complexity, Qatar shares the world’s largest gas field with Iran (under abutting territorial waters in the Persian Gulf) and they have been blockaded and isolated by the UAE and the Saudis, which may have been a punitive response to its cooperative agreement to develop that gas field with Iran. That response also came after Kushner’s dad tried to shake them down for a bailout of Jared’s 666 Fifth Ave boondoggle and it might even have catalyzed Rex Tillerson’s departure from the State Department, because Tillerson reportedly scrambled to stop a military move on Qatar by their Arab brethren. Perhaps not coincidentally, Qatar remains a hold-out to the Abraham Accords.

Ultimately, the people who will pay the steepest price for all of these moves are the Palestinians … who, I believe, are now destined to live in an ever-smaller patchwork system of de facto reservations and, therefore, remain perpetually stuck in a non-state limbo with only limited rights as non-citizen wards of the Israeli state.

'Sudan Enters The Outside-In Accords' has no comments