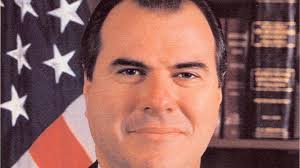 Mohammed Atta. The face of evil. The face of terror. The poster boy for 9-11…so ominous and foreign and dark and Arab. Somehow, his picture was splashed all over the 24-7 coverage within hours of those deadly attacks.

In fact, we had pictures of all of the hijackers. “How did we get them so soon,” I thought? Weren’t they using false names, false passports and IDs? What a bit of detective work! Or not.

Now we know. Some crazy, conspiracy-wacko Republican–Rep. Curt Weldon–is shouting out to the few who will listen that something strange happened. The Defense Intelligence Agency was tracking Atta under project Able Danger. They knew about his terror cell and activities before 9-11, before 2001. Some DIA guys tried to tell the FBI. The FBI responded by putting in earplugs and a donning sleep mask–like they were getting ready for a transcontinental flight and wanted some shut-eye.

And the 9-11 Commission didn’t really think it was important enough to look into. But, then again, Laurence Silberman and Lee Hamilton are practiced at the art of the semi-cover up…they did such a good job with Iran-Contra. A conviction tossed by Silberman–who was involved in the yearly arms deals with Iran, and Good Ol’ Lee pressed the Congressional brakes on anything that approached Reagan, Bush or the drug dealing antics of our Freedom Fighting friends. The CIA’s post-Gary Webb report confirmed the Contras were in the cocaine business, by the way.

But back to Able Danger…and the oddity that Atta was a known quantity, and that the chart the DIA has assembled…perhaps much like the chart compiled by FBI counter-terrorism expert John O’Neill prior to 9-11…has gone missing. That chart could be the Rosetta Stone of the whole operation, with names and places and events. It could unlock a host of mysteries. It’s been destroyed, apparently.

It’s not the only oddity. Two FBI agents investigating a couple bin Ladens in Falls Church, their Muslim charity (called WAMY) and terrorism funding links, were called off before 9-11 by a Presidential National Security directive…a W-199. That was reported on the BBC a couple years ago. Or how about those performance bonuses given to the two FBI agents who blocked further investigation into Zacarias Moussaoui’s computer or activities. Or the bonus given to the State Department official who okay’d many of the entrance visas for our fly-boy Saudi “friends.”

Oh, it pays to play ball.

Funny, though, is that this Atta story doesn’t seem to be getting any “traction,” as we say here in the WoB. Although, those other stories never got any traction. Oh well. It must not be important if the media doesn’t cover it. Like they didn’t cover the story behind the California Energy crisis, or the Energy Commission and the oh-so blatant link to what Enron did. Yeah, I know…connecting dots…it’s a mug’s game. Plus, you start to sound like some tripped out conspiracy theorist! You can’t have that.

You see… facts, when put into context and chronologies and linked to other facts, are really just little conspiracies themselves. They conspire to show patterns. Patterns are bad. Patterns lead one to questions and, gasp, conclusions.

I’m proposing nothing. It could all be incompetence. Government equals incompetence, right? Iraq=incompetence. Katrina=incompetence. 9-11=incompetence. Fair enough. But Able Danger proves that there was a lot of competence, too. As do many of the other lower-level, FBI investigations that got far and uncovered much. The surprise attack wasn’t so surprising after all. People knew something was coming. O’Neill even knew who, where and began zeroing in on when. He got kicked out of he FBI before he could do that…offered a job at the WTC and died in the attack. No, really. I can’t make that kinda stuff up.

So far, the media has continued to avoid the conspiracy of facts. Katrina is drowning out the story…another victim she can claim. Don’t bother with the CPR…it’d be wasted breath.

We can to ask ourselves, though, why wasn’t the Danger Disabled, why does the official story keep turning more and more into a Fabled Danger…and why hasn’t anyone lost their job if there was so much incompetence? I’ll get back to you when I get a chart.

'Fabled Danger' has no comments