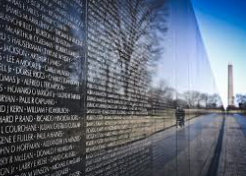 The Wall. The Vietnam War memorial. Whenever I go down to The Mall that long, angled epitaph to a tragic war calls me…and it brings me to tears. To my mind, it’s the only monument worth visiting over and over again. It never fails to cause reflection…whether it’s my face on the shiny black surface, or my mind pondering the sad, almost criminal, history of American warmaking since the end of World War II.

I’m not too old, but I do recall the controversy surrounding the design of the monument…a stark, simple construction that did not celebrate the war. Nor did it judge it. A design by a young Asian American woman–Maya Lin. A design that attracts scores of visitors. A memorial that invites them to pull the name of a fallen loved one off the wall with a piece of paper and a pencil. A memorial that invites reflection.

The most striking feature of the monument is the descent…from the high point of the walkway downwards, deeper and deeper against an ever-towering list of names. Eventually, the names dwarf you. You feel small against the backdrop…a roll call of lives lost in a war that had no victory, a conflict that was never declared…a fight we didn’t have to pick. A war that was started by a Texan, based on bogus claims of dangerous attacks in the Gulf of Tonkin and of jingoism about a decades-long war against evil communists who wanted to end our way of life. A war that made military contractors rich…like his buddy’s company, Bell Helicopter. A war that eviscerated a generation.

My latest visit came two days after Veteran’s Day. Flowers and wreaths abounded. The pall was palpable. And I cannot help but well-up each time I see someone searching for a name…finding it…and beginning the process of taking back the simple reminder of who they were…taking a copy of their name off the wall. But the tears flow more when I think about the names not on that wall. The names of the 1.5 million Vietnamese who died. Of the women and children, of the Christmas Day Bombing and Rolling Thunder. Or the “Strategic Hamlets” that had to be “destroyed so they could be saved.”

I am an American. I mourn the loss of fellow Americans. I mourn the loss of the 2000-plus who’ve died in another lie-driven, profiteering adventure…this time in Iraq. But I think, too, of the 100,000 Iraqis who’ve died. The radiation they’ll have to live with from depleted uranium ammunition, and the generations who will never forget the use of white phosphorous weapons.

We got lucky with the Vietnamese. They have centuries of practice fighting off invaders. And they are quite forgiving…given the circumstances. But we were a passing fad compared to centuries of dealing with the Chinese. Somehow, I think our luck has run out. I cannot forgive our “leaders” for sending our countrymen to die, and I don’t expect the Iraqis will forgive us anytime soon for demolishing their country, their lives and torturing their brothers and fathers and sons.

The Wall calls me every time. This time, it finally sank in that we refuse to look at this memorial for what it is…a caution…a warning…a marker that will stand as a testament to the repetitive cycle of a history unexamined.

'The Memorial to End All Memorials?' has no comments