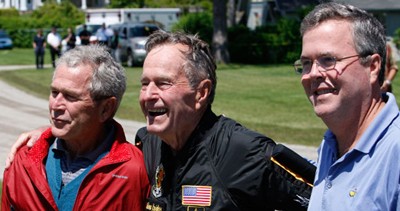 Guess what? Iran got plans for nuclear weapons from….the CIA! Yup! I’m not making this up. We handed over those plans in a “botched” intelligence operation. Isn’t that funny?! It reminds me of the time Donald Rumsfeld was on the board of a company that sold uranium to North Korea. Back in 1999, that was. Or the time the Bush administration decided, through executive order, to keep on funding the organization that was meant to transfer “peaceful nuclear technology” to North Korea, but actually lead to Kim Jong Il’s first nuclear weapon. Yeah, that was during his first term! Cool, eh? But then there is nothing like the international distribution network of A.Q. Khan…the world’s leading nuclear terrorist who spread nuclear weapons technologies and expertise to a variety of rogue nations. Funny, but although he was Pakistani and working right under the nose of the Pakistani ISI, the sefl-same ISI that helped to fund and create the Taliban and Al Qaeda, somehow the Pakistanis and A.Q. got off scot-free. What a lucky break! You see, after the Soviets couldn’t hold up their end of the bargain and the Cold War suddenly came to a screeching halt, America’s mighty military-industrial complex found itself in a tough spot. Not much of a enemy left. Not much of a reason to spend more on defense than the rest of the world combined. Not much need for the growth of our expensive nuclear arsenal. So, the nineties were a “downtime” for the Beltway Bandits…those defense contactors who ride the death and destruction gravy train all the way to their nice, cozy bank accounts in Zurich. Then came terrorism. And swarthy Arab infidels. And WMDs…of which, we are the world biggest producer. And the rise of the “Rogue State.” That nation with little military might, posing very little risk, but…if given the right cocktail of nuclear know-how and demonization…could justify the expansion of the US military and the contracts of beleaguered military moneymakers. Yeah, during the lean Clinton years defense spending dropped all the way down to 1960 levels…during that “lull” in the Cold War! It was what the Project for a New American Century tried to figure out in 2000…how to convince the American people to spend more on defense. They said we needed a “New Pearl Harbor.” Now that’s funny…considering what we now know about that! Oh, I love declassified documents, don’t you?! So, they’d seen just what the taxpayers could do for them during Reagan…when he Soviet threat was ginned up and sold to the American people. When manipulated intelligence estimates done by Wolfowitz and Perle during Poppy’s tenure at the CIA came to cash-laden fruition with method-actor Ronnie leading the anti-Commie charge. We got scared of the Soviets again. The rest was money in the bank. So here we are again. We created Al-Qaeda with the Saudis and the Pakistanis, we fund and equip North Korea, we hand over plans to Iran and don’t seem to give a damn about Uncle A.Q.’s International Nuclear Superstore. And then there is the history of Saddam, the CIA and the Bush team. The love affair was moving, but the breakup was nasty, wasn’t it? And I thought April Glaspie did her best to give Saddam some lovin…but Poppy sure turned on his “bottom.” I guess Poppy always been a “top.” Isn’t it funny how these things happen? How totally “inept” our CIA is supposed to be? How many friends become enemies and how often we support those who we eventual attack? Isn’t it funny how much we find that propaganda is being generated by tax dollars and used to convince us of X and Y? During the ultra-secret Manhattan Project, the Soviets had a spy working on it. A known communist, he made weekly trips to a Santa Fe train station to pass along his secrets to a Soviet agent. We knew. But he kept on doing it. Why? Mack White knows. Check this out: Operation Northwoods. This is all historically sound, historically based. And you can read the Northwoods document yourself…at the National Security Archive. Look it up. You’ll see that power needs enemies, military moneymakers need enemies. Just like W said during his latest “Iraq is a good little war” speech. He pointed out that “the terrorists” wanted to use Iraq as a base. He then told us “That he isn’t making this up.” Whew…good thing…’cuz it’s so hard to tell anymore. Believe me and Mack White…’cuz you can’t make this shit up!