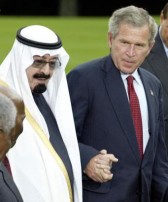 Here’s a little vindication for the artificial scarcity thesis.

Palast is the guy who, after fleeing to Britain in search of a chance to actually report news, broke the story of over 50,000 names purged from voter lists in Florida before the 2000 election. Names that “sounded Black,” were in predominately Democrat districts…names with felony convictions in 2007, for example. A purge carried out by Choice Point…a firm hired by Katherine Harris.

Palast has been all over Hugo Chavez and the US-supported coup that failed shortly after the Bushies took office. Hugo’s got some oil, btw.

Palast also pointed out that the acronym for the invasion of Iraq, used by Ari Fleischer in his first invasion press conference, was Operation Iraqi Liberation–O.I.L. I love the Bushies’ sense of humor.

Now, in his new book, Palast gives us the document that proves the artificial scarcity thesis promoted in this blog. Here is an excerpt from today’s interview:

AMY GOODMAN: Is the war in Iraq a war for oil?

GREG PALAST: Is the war in Iraq for oil? Yes, it’s about the oil, but not for the oil. In my investigations for Armed Madhouse, I ended up with a story far more fascinating and difficult than I imagined. We didn’t go in to grab the oil. Just the opposite. We went in to control the oil and make sure we didn’t get it. It goes back to 1920, when the oil companies sat in a room in Brussels in a hotel room, drew a red line around Iraq and said, “There’ll be no oil coming out of that nation.” They have to suppress oil coming out of Iraq. Otherwise, the price of oil will collapse, and OPEC and Saudi Arabia will collapse.

And so, what I found, what I discovered that they’re very unhappy about is a 323-page plan, which was written by big oil, which is the secret but official plan of the United States for Iraq’s oil, written by the big oil companies out of the James Baker Institute in coordination with a secret committee of the Council on Foreign Relations. I know it sounds very conspiratorial, but this is exactly how they do it. It’s quite wild. And it’s all about a plan to control Iraq’s oil and make sure that Iraq has a system, which, quote, “enhances its relationship with OPEC.” In other words, the whole idea is to maintain the power of OPEC, which means maintain the power of Saudi Arabia.

And this is one of the reasons they absolutely hate Hugo Chavez. As you’ll see in next week’s Harper’s coming out, which is basically an excerpt from the book, Hugo Chavez on June 1st is going to ask OPEC to officially recognize that he has more oil than Saudi Arabia. This is a geopolitical earthquake. And the inside documents from the U.S. Department of Energy, which we have in the book and in Harper’s, say, yeah, he’s got more oil than Saudi Arabia.

Now, if you gotta understand the relationship between the Bush family and the Saudis, and the Kuwaitis, for that matter. The relationship between Enron and the California energy crisis. The ultimate two-fer that they and their corporate base are now enjoying…the use of war to both profiteer the defense budget and to profiteer the oil market. Plus, it generated a terrorist state where there wasn’t one, amplifying the fear they use to preserve power and justify huge budget increases.

Palast also writes about the continued gaming of elections. The fact that Black voters are, from one election tot he next, finding more and more of their votes thrown out as “spoiled,” or as votes unable to be counted. Add Diebold to that and, well, you’ve got a huge consolidation of control over the outcomes of elections.

Now, Palast had to go overseas to do the reporting he does. Reporting that British viewers see. But not us. When he had the Florida election scam by the short and curlies, he took it to CBS and they bought exclusive rights to the story. CBS then, just a few days before the story was to air, told him they would not run the story because it wasn’t strong enough…they did not have enough verification. Because actual documents are not strong enough to make a good story. Because they had exclusive rights, the story died there. And the Bush Presidency lived on.

Welcome to our news bubble, my friends.

So, I take Palast’s use of an actual document with a grain of salt. The document will be ignored by our mainstream media whores…much like the PNAC’s stunning plan for Iraq and the world–Rebuilding America’s Defenses.

For those of us crazy enough to ask questions and consider documents, Palast has given us a cool drink of water in a dry and thirsty land. A little refreshment in this choked-off bubble.

'O.I.L. aka Operation Iraqi Liberation' has no comments