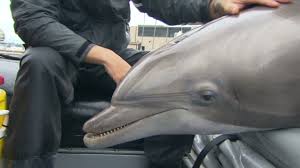 I know this is cheap blog…a retread of a comment I posted. I just loved the idea of Flipper and a Seal involved in extraordinary rendition, I couldn’t let it go by in the bulletin ether:

–>Just want to keep you in the infinite loop:

Dozens of dolphins and sea lions trained to detect and apprehend waterborne attackers could be sent to patrol a military base in Washington state, the Navy said Monday. In a notice published in this week’s Federal Register, the Navy said it needs to bolster security at Naval Base Kitsap-Bangor, on the Puget Sound close to Seattle.

Dolphins also are trained to detect underwater mines; they were sent to do this in the Iraqi harbor of Umm Qasr in 2003. The last time the animals were used operationally in San Diego was in 1996, when they patrolled the bay during the Republican National Convention.

Sea lions can carry in their mouths special cuffs attached to long ropes. If the animal finds a rogue swimmer, it can clamp the cuff around the person’s leg. The individual can then be reeled in for questioning.

OKLAHOMA CITY – A Senate committee Thursday debated legislation that would prevent state government from forcing the implantation of a microchip in humans.

A drug-resistant bacteria that is infecting wounded US soldiers in Iraq — and has spread to civilian hospitals in parts of Europe — accidentally evolved in US military hospitals in Iraq.

“By creating the most heroic and efficient means of saving lives in the history of warfare, the Pentagon had accidentally invented a machine for accelerating bacterial evolution and was airlifting the pathogens halfway around the world,” Wired magazine reveals.

…not major network news or the vaunted New York Times (shill alert!), which is ginning up support for the pending attack on Iran. It’s easy for the editors at the NYTimes…they just change the Q to an N and they can run the same scary stories by the same discredited “reporters.”