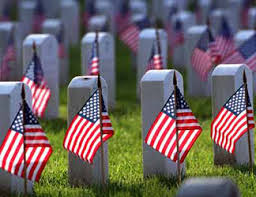 It’s pure Americana. The kick-off to the Grilling Season, it is a three day intro to Summer for America’s families.

Barbecues. Picnics. The first trip the beach. A time for the American Way of Life to be celebrated with copious amounts of beer and hot dogs. It is also a weekend of sales. Cars. Mattresses. Big screen TVs. All of American Life squeezed into the brass ring of our work life: a three-day weekend.

Some people remember to display the American flag. But few people stop and consider the name for the day and the meaning behind it.

Too much consumption and too little reflection, perhaps.

Memorial Day is the set aside so Americans can remember…memorialize… the death of thousands upon thousands of American soldiers throughout our history. To thank, as it were, those who made “the ultimate sacrifice” to defend America. And, as the slightly jingoistic phrase goes, to “defend our freedom.”

All of this memorializing of sacrifice is set in stark relief against a backdrop of gluttony and shopping.

Sure, there will be parades. And Arlington Cemetery will play host to a Presidential photo op. But what does it mean that a somber and sullen occasion like the remembrance of fallen soldiers became a time of fun and sun and food and cheap mattresses?

Memorial Day is a peculiarly American holiday for just that reason. Its “celebration” lacks historical context. Lacks any real contemplation of the cost in lives to preserve the American Way of Life. Or any accounting for the reasons behind those wars and the deaths that poured out of them. In typical American fashion, the memory is stripped out of the word memorial so that it becomes something totally different that it is. Than it always was.

This year’s Memorial Day this phenomenon is particularly acute. As “holiday travelers” thought about scaling back their driving due to higher gas prices, there was an ongoing reason for solemn reflection.

Of all years, wouldn’t this be a good one to cancel the trips and shut off the barbecues…to gather around those who’ve lost loved ones, or around those who’ve survived this and previous wars? Isn’t it a good time to look into our collective soul and ponder the question of why we’ve lost so many to war? Or to use that oft-referred to freedom to express ourselves and our supposed, growing disdain for this war?

No. The meat is grilling and the mattresses are selling.

It is because we, as Americans, cannot begin to take real responsibility for what we have wrought.

The blame is not for those who actually wore or are wearing uniforms. For those who have been in war and lost limbs or lives or friends in foxholes. They do what they are told to do, what they are required to do. By us. Yes, all of us.

And no, a “Don’t Blame me, I Voted For Kerry” bumper sticker is not an exemption clause. Not an escape.

Because those “freedoms” and the “democracy” that those soldiers supposedly died for means that we all are responsible for the death and destruction that happens, that has happened, in our name.

The 3,435 Americans dead as of the writing of this blog. The hundreds of thousands of Iraqis who’ve died. The nearly 4 million Iraq refugees. All of that blood and pain and destruction…it’s on our hands this Memorial Day.

But who in America right now, crowded around a picnic table or a barbecue grill thinks of themself as responsible for all that carnage?

And that is the problem.

For we know so little of our own history, let alone what is happening right now. This is particularly true of the various wars that were not fought to “preserve our freedoms.” Wars not fought to protect our so-called democracy against invaders and enemies.

Sure, World War II was a good case of a good war against obvious threats.

But World War I? No real rationale for that one. Woodrow Wilson had a “vision” for the world and America’s role in it. Wilson is, not surprisingly, a big hero to the Neo-Cons…even though his Wilsonian vision was mostly a failure.

Santayana is laughing…do you hear him?

Our entrance into World War I was far more turbulent and unpopular at home than the causally under-informed American knows. It caused an “isolationist” reaction in the 1920s and 30s. The term in now an epithet. Although isolationism might actually, in non-interventionist form, remove the giant American thorn from the World’s paw and, consequently, stop all the blowback we seem to suffer.

Hey, it worked for Daniel.

And then there are the other wars. The Mexican-American War was pure expansionism. No freedom at stake there, except for the freedom of Americans to take what wasn’t theirs. Same with the Spanish-American War. The Korean War. The Vietnam War. Countless little interventions designed to make business safe for corporations and to keep resources out of the hands of peasants in their far off lands.

But most Americans know very little of this history. Of their history.

They rarely think about the 1.5 million Vietnamese who died.

We do recall Vietnam Veterans and finally give them the social acceptance they should’ve had as soon as they got back. But we underfund and occasionally cut the budget of the Veterans Administration.

Few, if any, families are inviting a group of psychological and/or physically scarred Vietnam Vets to come into their homes and yards for hot dogs and hamburgers and a few cold beers. So why, then, should we raise taxes on the dividends of our great investor class to pay off some of the human cost of their extravagant American lifestyle?

You see, it is related. The reason we have such plenty, such an abundance of beer and hot dogs and mattresses, is because we have used our military to enforce, incrementally and over time, an empire around the world. We have accumulated riches. We have secured everything from oil to bananas with our guns and our military and our dirty little covert wars.

All of American Life is made possible by the overwhelming force of our advanced weaponry and the young men and women we put into uniforms. They are more a victim to this than the rest of us, because they sometimes go in as a way out of the working poverty that also goes along with our American Way of Life. Because there is no other way to college. Because, at times and for some, there is no other way.

Still others go in for the “patriotic” reason. Because they love and believe in their country and want to serve in its defense. These are the people I am thinking about today.

All those young men and women who went in with the purest intentions, but found themselves as pawns in the great game of empire and power and oil. Who might have gone in after 9/11 to help their country respond to an attack, but ended up occupying a country of innocents who had nothing to do with 9/11, but had the unfortunate luck of being in a lynchpin country in a theoretical global strategy concocted by some corporate power players and Neo-Cons who, like Wilson before them, wanted to reshape the world.

Now they die in the service of power and greed. Not to protect our freedoms. Their families suffer. And they will suffer from the scars of being part of an immoral occupation. They will suffer like the Vietnam vets before them.

Some make the ultimate sacrifice.

Meanwhile, on this most somber of days when we should consider the high cost of America…both now and then, the vast majority of us will overeat and drink too much and maybe partake in some of those amazing sales that dot our consumerized country.

And somewhere in Iraq, a soldier may die. Iraqis are, most certainly, likely to die. And we can curse the high price of oil and the “holiday traffic” and ignore the one word that seems to have left our collective consciousness–sacrifice.

'Memorial Day of Reckoning' has no comments