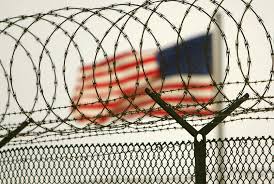 Another suicide at Guantanamo.

Years and years of detention, strange psychological games and bizarre, “no really, it ain’t torture” rituals led another evildoer to take his own life.

Of course, the Pentagon doesn’t it call it suicide. The term is “an act of asymmetrical warfare.” Seriously. When three evildoers ended their life sentence early in June of 2006, the War on Terror talking point called the suicide an “act of war.”

It is reminiscent of another famous euphemism for suicide…Rev. Jim Jones told his followers that they were “not committing suicide, it’s a revolutionary act.”

So, just to keep in lockstep with the War of Terror terminology…Another act of war occurred at Guantanamo.

The funny thing about this one is the lead in to the story in today’s Washington Post:

A detainee found dead in his cell at Guantanamo Bay on Wednesday was a Saudi army veteran who trained with U.S. forces before fighting with the Taliban in Afghanistan, according to military hearing records.

Here is an evildoer who is being kept away from civilization, never charged with a crime or able to see a lawyer…and he was not only another example of one of our Saudi friends involved in “terror,” but he’d also trained with US forces.

But he is not the first.

In fact, during the crazy aftermath of the 9/11 attacks Newsweek ran this interesting tidbit:

“U.S. military sources have given the FBI information that suggests five of the alleged hijackers of the planes that were used in [the 9/11] terror attacks received training at secure U.S. military installations in the 1990s.” — 9/15/01

And then there is this from the NY Times from the same day:

Stranger still is the fact that these connections disappeared from the media. Vanished.

And the Joint Congressional Report on their investigation into 9/11? Redacted.

Or so we can assume, because 28 pages of the report relating to Saudi financing and other sticky Saudi issues will never be seen by the public. The Saudi-loving Bush team waved the magic wand of “National Security” over the report and made potentially difficult to explain information just disappear.

Sorry America, you are on a “need to know” basis.

That didn’t stop one patriotic Air Force Lt. Colonel from speaking his mind. Not too coincidentally, Lt. Colonel Steve Butler was serving as vice chancellor for student affairs at the Defense Language Institute in Monterey, California when he wrote a letter to a local paper claiming Bush knew of the impending attacks and, essentially, let them happened to save his Presidency and get his War on Terrorism.

Of course, he was relieved of his duties. Duties that may have had him cross paths with one of the hijackers admitted by the Defense Department to have attended the famous language school.

No, stop that. It’s a just a coincidence.

In the shady world of fun and games we call espionage, there are assets and negative assets.

Assets are agents, contract agents, informants and other “friendlies” who work with an agency…like the CIA, the FBI, the NSA or the recently ascendant DIA (Defense Intelligence Agency). Assets are the characters we see James Bond movies.

But there are other “assets” agencies acquire and use. Less known, but just as important, they are called “negative assets.” These unfriendlies are recruited by deep cover assets to inflict damage, run terror campaigns and generally wreak havoc on…ourselves.

Negative assets can be used to alter the political dynamics of a friendly country heading toward turmoil or privatization of resources our corporations want to control. They can be use to unseat public allies who are private foes or public relations liabilities. Dictators who become liabilities, for instance, can be overthrown by enemies that an agency funds, trains or otherwise helps materially to carry out a task the agency’s government cannot public condone. By people the government cannot public condone.

It makes for strange bedfellows.

One of the great practitioners of this negative asset allocation is Israel.

In the early seventies, men like former Prime Ministers Yitzhak Shamir Ariel Sharon decided that they needed to counter the PLO within the ranks of the Palestinians. Voila! The government helped to establish Hamas. Really, it’s true.

They provided funding and support, and helped to create a terrorist organization.

Now they use Hamas as a rationale for continued occupation. Hamas has, in turn, bedeviled the Palestinian Authority’s attempt to govern the Occupied Territories…thus creating a low-grade civil war between Hamas and the PLO.

Bonus! Now they are killing themselves.

And now the Israelis and the United States are assisting PLO elements within the Palestinian Authority in their struggle against Hamas. The money is flowing.

And it goes even further…a story today in the UK newspaper The Telegraph points to documents that indicate the famous hijacking by the Popular Front for the Liberation of Palestine (PLFP) at Entebbe may have may have had assistance from an Israeli agency…Shin Bet.

That hijacking and the heroic raid by Isreali forces that followed became a rallying point for resistance to Palestinian claims for independence from occupation. It helped to unite Israelis behind the cause. It helped to demonize the Palestinians.

Enemies are, for governments seeking justifications or legitimacy with their own people and foreign powers, golden.

British intelligence had assets working in the IRA. Italian and US agencies had assets in the Red Brigade.

And the US (the CIA) was present and instrumental in the founding of what would become Al-Qaeda.

It doesn’t stop there.

Seymour Hersh has been reporting, much to the indifference of the mainstream media, that the Bush Administration has quietly been using Prince Bandar, a.k.a. Bandar Bush, to fund Sunni extremists in terror campaigns in Lebanon and Iran.

Yup. Saudi money and Wahhabism…the potent cocktail that lead to the rise of Al-Qaeda and the 9/11 attacks…is being used to foment a spreading conflict between Sunni and Shiites in the Islamic world.

Bonus! That “killing themselves thing” is as good as it gets in the hurly burly of empire building.

The camp in Northern Lebanon that was in the news over the last couple weeks?

The terrorist attacks by Pakistanis in Eastern Iran a couple months ago?

Those money trails lead back to our, or…more precisely…the Bush Team’s, Saudi friends.

We’ve seen it here at home, too.

The Miami “Terror Cell?” Negative assets recruited, supplied and goaded into delusions of terroristic grandeur by an FBI agent. That case is going nowhere because the negative assets were incompetents and the operation bungled.

But how many of those operations make through to completion?

Without some slip-up along the way, it is hard to know. Because a good negative asset is one who doesn’t realize that they are being controlled by an asset…a member of an agency or government who would be otherwise considered the enemy by the negative asset in question.

Negative assets, when they work out, have the greatest degree of plausible deniability possible. Plausible deniability is the mother’s milk of espionage fun and games. It protects those at the top who send their orders down the chain of command. If an agent, an asset or an operation is compromised? Well, it stops at the lower level, keeping the string pullers from ever being tainted or, depending on the type of operation, convicted.

So when we think about this latest suicide…sorry, excuse me…act of war…at Guantanamo, and the fact that he, like so many others, had links to the US military…we are left to speculate about what really happened to bring him to the both Gitmo and his death.

Was he another negative asset who had to be pulled off the War on Terror battlefield to keep him from divulging compromising information? Is that why he was never charged? Was never allowed to speak to a lawyer? Was he a product of an Evildoer Enemy Factory, churned out to justify a power play for dominance of the Middle East and all that powerful and profitable oil?

Is the War on Terror just a game of shadowy puppetry…assets and negative assets unleashed to create war justification and legitimacy where once there were none?

Well, America…you are on a need to know basis. And like those 28 redacted pages on the role of the Saudis in Al Qaeda and 9/11…it has been determined that you don’t need to know.

'America’s Investment in Negative Assets' has no comments