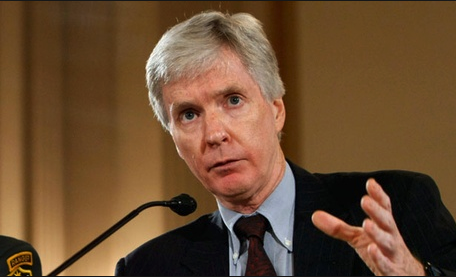 The “career diplomat” and fmr. Ambassador to Iraq and current Ambassador to Afghanistan, meaning de facto “provincial governor,” told Reuters that the U.S. will need to stay in Afghanistan to prevent another 9/11.

Bin Laden is dead? So what?

Al-Qaeda is basically dead? So what?

Afghanistan is a centuries-old graveyard for imperial lust? So what?

We’ve got the mother of all rationales, and a nice, neat numerical demarcation point to hang it on.

Yes, the 9/11-10th Anniversary Media Feeding Frenzy is upon us, and Fear, Inc. is about to reacquaint us with those tried and true justifications for a vast and costly empire.

Oddly, Obama came in on the vague promise of turning away from Iraq and finishing the job in Afghanistan. But we all know, or we should know, that we are never really leaving. Ever.

We could drone bomb every single “suspected, linked, associated or distantly related” terrorist du jour, and still we will not leave.

We could depopulate the entire region. And still…we will not leave.

The oil and gas reserves of the Caspian Sea and the close proximity of Russia and China to those long-fabled reserves. Simply put, Obama’s policy reflects the long-standing imperative to control Eurasia and secure unfettered access to those reserves.

In fact, President “Hope-Change” relied on Zbig Brzezinski as his primary foreign policy guru prior to his election. It stands to reason that Zbig’s influence would stretch well into his presidency.

You probably know that, though. Right?

Zbig was the guy who started President Carter on Afghanistan and the U.S. on the hard-line approach to Eurasia.

He’s long wanted to check Russia and China in the region and use U.S. hegemonic power to dominate the Caspian’s oil and gas reserves. Control over Afghanistan has long been seen as the key to that domination.

And he wrote the book on it.

It’s titled “The Grand Chessboard.” As it turns out, our hope for change was merely a pawn in that great game.

Take a look at the highlights. It is very much like a blueprint for the Neo-Con agenda of the Bush Administration.

So, when you listen to Obama stumping this issue over the next year and touting his better, saner war policies…just keep this connection in mind. And think about Ryan Crocker’s dire, suitable for mass-consumption warning.

Whether it’s Iraq or Afghanistan…it is all about holding on to a permanent military presence in the region. Period.

Why? Oil, gas and the brimming trough of taxpayer dollars filled annually by the Defense Department. There is a lot of money in protecting corporate access to resources.

Why are we still there?