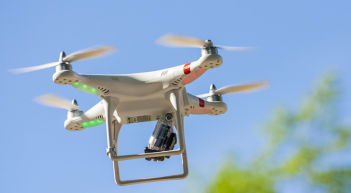 I’ve been droning on about drone warfare. And about the current explosion in war-making technologies. I say “explosion” because I refuse to call them “advances.”

And a generation of future soldiers who’ve cut their canines on one shockingly graphic war simulator after another. Just sitting there on a couch, pushing a button and killing one CGI enemy after another. Forget the push-ups, a ready-made army of push-button pilots awaits a near-future filled with ultra-quick assassinations, all-too-easy bombing runs and the ominous and omnipresent patrolling of the skies.

By taking humans away from the immediate impact of the killing, we are taking the humanity out of the decision to kill. We are, in fact, boldly going where no man has gone before.

In an episode titled “A Taste of Armageddon,” computer technology has taken the messy complications of war out of the equation. This “advanced” technology allows people to kill each other cleanly, methodically and without the stain of blood on their hands or the stain of remorse in their hearts. In fact, war can go on without any real incentive to stop it. The cities remain. The people live, until their deaths are registered by computer simulation and they must report to a disintegration chamber. Then their deaths are counted.

Remove the blood from the hands and remove the reason to stop killing.

Shatner gives one of his best, over-the-top performances when he delivers a monologue to Anan Seven, the leader of the methodically-structured planet who must suddenly face the harsh reality of war. To save his ship, of course, Kirk has destroyed the computer in question and unleashed the all-too-real dogs of war upon Anan’s planet.

Will we, in light of a never-ending war against a world filled with potential enemies both real and invisible, simply relent to the same impulse if there are no coffins coming home, no disabled veterans or PTSD or loved ones who can reflect back the horrors of war simply by looking you in the eye?

Will we lose that connection to our past and ourselves by inserting a technological interface between us and the darkness? The aversion to war comes from the reality of it. But, if it simply becomes a reality show and our soldiers merely joystick operators toiling away in air conditioned bunkers, what impetus will there be to stop? And rest assured, other nations are busily working on drones of their own.

Captain James T. Kirk:
“Yes, Counselor, you have a real war on your hands. You can either wage it with real weapons, or you might consider, an alternative. Put an end to it, make peace….”

We find ourselves at a crossroads. This is the moment to reflect back upon the time when “A Taste of Armageddon” was made, set against a backdrop of escalation in Vietnam and the Cold War’s looming specter of nuclear holocaust. But take a moment also to understand the prescience of it’s warning and to decide whether or not you want to boldly to go where no man has gone before.

Alas, waiting for Captain Kirk is not an option.