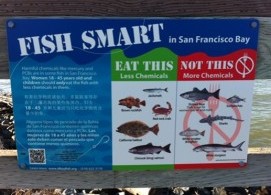 If you live near a significant body of water—along the ocean, near a lake or bay, or close to a notable river or tributary—you’ve probably seen a sign similar to this one posted in a local wildlife reserve on the eastern shore of the San Francisco Bay.

And it’ll be a relevant sign for some time to come, because we humans have done a bang-up job of poisoning the waters upon which all life depends.

And in the case of the food chain, people are firmly on top—in the missionary position—and we’re rapidly rogering the planet’s water resources with clouds of coal soot, tons of discarded plastic, countless gallons of burnt and spilt oil and a bevy of bioaccumulating toxins and poisons and pesticides.

Perhaps it is “just desserts” that bioaccumulation—the funny way toxins seem to accumulate up the food chain as the “lessers” get eaten by their “greaters”—leads right to the dinner table of humans. By the way, no one who eats fish is exempt from this process.

Although the authors of the “Fish Smart” warning are willing to make some key distinctions:

Fricassee of fish with “Less Chemicals?” Women and children first!

Interested in the “More Chemicals” portion of the menu? How about a nicely breaded and fried filet of Striped Bass?

Go ahead. Help yourself! That is, if you’re a gal already past your child-bearing years…or merely a dude.

Dudes—we got more of ‘em than we need, anyway.

It’s said that comedy depends upon tragedy, so perhaps this wouldn’t be so funny if it wasn’t so damn tragic.

Both tragically and stupidly, we’ve run askance of an old Sicilian proverb. In the interest of avoiding spam filters, I will translate. It goes something like this: “Take great care to avoid defecating in the specific area where you also acquire your food.”

But that is exactly what we’ve been doing for decades. The effluvia from increasingly overtaxed sewage systems pour into oceans and rivers. And if you think “sewage treatment” takes care of it, think again. We’ve all seen one of those “reclaimed water” signs that warn “Do Not Drink.” The truth is that “treatment” doesn’t equal “clean.” In fact, people are passing so much Prozac that it is actually affecting shrimp around the world. Then add on top of that a growing tidal wave “run-off” from factory farms, which, it is worth noting, is also killing off huge swaths of the ocean every year. In essence, what we eat is also defecating where we eat.

And then there’s the trash. Mountains of it. Or islands of it, as the case may be. Yet, the Great Pacific Garbage Patch is just what the eye can see—a floating, visible monument to human indifference. Back on the food chain, some 260 species of fish eat non-biodegradable plastic and there seems to be a plastic film floating all over the top of the Pacific Ocean.

However, if you want to see the cost of humanity’s addiction to plastic, look no further than Midway Atoll. Once made famous by the World War II battle that halted Japan’s ambitions, it now typifies humanity’s disposable lust for bottled everything. Japan’s dive bombers and battleships got nothing on plastic bottle caps for pure, enduring destructive power. It’s a grotesque, losing battle for the birds that nest on Midway.

Let’s be honest. The world’s oceans—the historic cradle of life—are dying. And people are the reason.

And it’s not just industry. Or the global feeding frenzy of overfishing. Or the constant craving for oil. It is also the shrill whine of “recreation,” which brings with it noxious clouds of particulate-bearing exhaust, countless oil slicks and the constant churning up of previously-settled pollutants. The two-stroke engines of jet-skis and small boats are the primary culprits. Ironically, people fish off the sides of boats that use engines that, in turn, poison the fish they want to eat.

We cannot continue to interrupt the most basic cycles of life with our chemicals and unbridled consumption and expect it to simply persist in spite of us. We are going to have to become truly “Pro-Life” and stop being the agents of life’s destruction on the most fundamental level.

Anyone who claims to be “Pro-Life” without also campaigning to strengthen the EPA, to crack down on violators of the Clean Water Act or to engage in a full-scale remediation of the toxic legacy we’ve left and continue to leave throughout the planet’s precious water sources…well, they are just playing an Auto-Tuned fiddle while the whole damn planet burns.