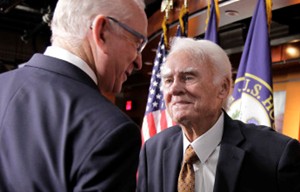 According to a notable Post-modern Cassandra, “Nomenclature is destiny.”

That adage proved true once again, this time in the strange case of the four “best-paid” Congressional beneficiaries of the defense industry’s impressive political slush fund.

According to a recent article in AlterNet, four of the six largest recipients of Military-Industrial campaign donations are:

First of all, they all have nicknames. What are the odds? Is it a requirement to join the club…like a frat house initiation?

Secondly, all those nicknames really “add up,” don’t they?

Finally, they all sit in key positions on the key committees and subcommittees that reallocate taxpayers’ dollars into the hands of defense contractors.

Because the defense industry generously passes out the bucks to “Buck.”

“Bill” never met an authorization he didn’t like, nor has he refused those stacks of bills offered in exchange for his reliable compliance.

Dutch is one guy who never has to “go dutch” when it comes to financing his reelection.

And Mo gets mo’ and mo’ money with each passing election cycle.

These are the biggest, shiniest stars in the Empire’s greatest hit: Duck and Cover Soup!

After extended runs in Afghanistan, Pakistan, Yemen and Somalia, it is opening in new “theaters” around the globe: in Niger, Mali and the Persian Gulf.

Thanks to drones, these may be “limited engagements,” but rest assured that Duck and Cover Soup will open in more theaters, even if it doesn’t turn out to be a big hit in current screenings.

Of course, like any blockbuster franchise, future sequels are already in development. Sure, they just keep remaking the same movie. Just like Hollywood, the Empire’s producers don’t really have any original ideas.

Alas, this is no laughing matter. America is more and more like a Marx Brothers’ movie every day.

The plot is absurd. Like Freedonia, our country is broke. But unlike the zany brothers in the original Duck Soup, this current cast of characters ain’t very funny.

Frankly, we’d all be a lot better off with Groucho, Harpo, Chico & Zeppo.

At least we could laugh all the way to The End. 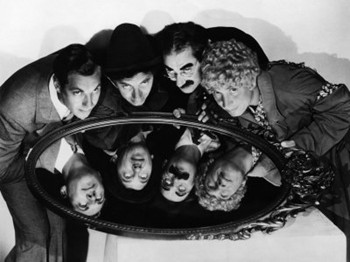 'The Military-Industrial Marx Brothers' have 3 comments