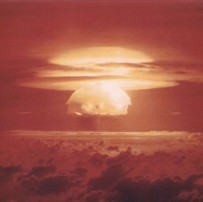 The defense industry dreams of genies.

That’s because it is really hard to get the genie back into bottle after you let it loose.

Really, the only option after releasing a genie is to invent new, expensive ways to combat it. And that’s been the story of America’s persistent gift to posterity—the “nuclear genie.”

Just ask the people who refuse to return to the site of America’s most notorious above-ground nuclear test—the bombing of Bikini Atoll on March 1, 1954. That hydrogen bomb, codenamed “Shrimp,” remains the largest bomb ever tested by the United States. It’s also known as a “thermonuclear weapon” because it uses high temperatures to trigger four cascading stages, each magnifying the power of the explosion. It was an “advance” on the run-of-the-mill atomic bombs dropped on Hiroshima and Nagasaki. And it was a response to the Soviet Union’s emerging atomic weapon program, which was, in turn, a response to America’s pioneering effort to weaponize the atom.

In fact, six years after the H-bomb spread nuclear fallout onto nearby islands and their inhabitants like radioactive snow, the Soviets kicked it up a notch by testing “Tsar Bomba”—the biggest bomb ever to explode in the history of mankind. It was 1,400 times the combined power of those dropped on Hiroshima and Nagasaki.

The nuclear arms race was on. And companies like General Electric, Westinghouse and Boeing ran it. The folks at Boeing had such a great sense of humor that, in 1957, they actually named a nuclear-tipped air-to-air missile system “The Genie.”

Between 1945 and 1998, seven nations unleashed 2,053 nuclear explosions. North Korea joined the party in 2006. Israel remains a silent partner in the perpetual race. All are on the same treadmill.

But that’s the nature of war-based economies. They depend upon running in arms races. Once the starting gun is fired, science and technology and huge amounts of tax revenue are marshaled into a hamster wheel-like sprint to stay ahead of everyone else. It is a perpetual machine unlike any other. And it’s a machine that’s becoming more and more automated, autonomous and pervasive with the advent of drones.

The Army’s new search for “anti-drone” technology is the logical next step in what is sure to be a long-lived and highly profitable new arms race for the 21st Century. According to the website Defense Systems, the Army has “issued a sources sought notice for information that can help in developing an affordable Counter Unmanned Aerial System (CUAS).”

Why? Because, as the solicitation notes, “U.S. forces will be increasingly threatened by reconnaissance and armed unmanned aerial vehicles (UAVs) in the near and far future.”

Perhaps that’s why the Washington, D.C. region is quite literally the only region in the U.S. with any economic confidence. In the most recent Gallup survey, the Beltway scored a +19. The second highest was Massachusetts at -1.

All of this exuberance is quite rational given the fact that America’s unchallenged drone supremacy, and its unique ability to use them with an unparalleled impunity, may finally be coming to an end. The flying killer robots might even come home to roost. So, the Pentagon will pay handsomely to find new and exciting ways to shoot ’em out of the sky.

It’s the nuclear arms race all over again.

China has developed its first stealth drone and, according to a story in International Business Times, owns the “most extensive fleet among the few countries that operate them.” Like the U.S. Army, China is also looking for ways to address the other guy’s drones. The People’s Liberation Army is currently seeking countermeasures and counter-surveillance to U.S. surveillance flights over China by long-range Global Hawk drones, which originate out of Guam.

Now that the genie is out, the cash is rolling in. A recent report by the International Institute for Strategic Studies (IISS) predicted a sharp rise in use of drones for warfare, a rise facilitated by a drop in operating costs. The report also said China is driving a regional spike in military spending. Is that a response to America’s Pacific Pivot? Or America’s gargantuan defense budget? Or drones flying from Guam?

For now, the U.S. has the technological lead, an already-entrenched political lobby for drones on Capitol Hill and a new, 25-year long roadmap from the Pentagon charting out the future of all kinds of flying robots—from self-sufficient killer robots that “take the ‘man’ out of unmanned,” all the way to Northrop Grumman’s 757-sized surveillance drone that, as Wired reported, “offers a 360-degree view at a radius of over 2,000 nautical miles.” The Navy has ordered 68 of those babies.

And Russia is right there, doing its best to keep up with the Droneses. Not only does Russia have a fleet of approximately 500 drones, it has 43 different types of drones. It’s even working on a 20-ton flying behemoth that is the “Tsar Bomba” of flying killer robots. Additionally, the Russian Defense ministry recently announced a $9 billion drone program, expanding on deals it already has with drone-makers in Israel and the United Arab Emirates.

Yes, you read that correctly. The United Arab Emirates.

But the U.A.E. isn’t the only new player in the widening world of drones. Even Facebook sees the long-term wisdom of investing in drones. The rumored buyout of Titan Aerospace and its solar-powered mega-drone—which can stay aloft for up to five years—could one day deliver internet access to earthbound customers.

Like Tang and microwaves ovens, the consumer and private drone markets are the so-called “spin-offs” that supposedly justify the costly, taxpayer-funded race. In the case of Titan’s solar-powered drone, the scarier idea is that the technology will be spun back into the military, the CIA or the NSA to keep their surveillance drones in a perpetual spying sortie that fills the skies indefinitely.

Like all arms races throughout history, the drone race will also end in a stalemate. Billions will be spent by Congress. Billions will be made by the defense industry. But until the next new weapons system comes along to replace drones as the genie du jour, drones will continue to make one thing all war economies cannot live without—an endless supply of enemies.

'Drones and the Dream of a New Genie' has no comments