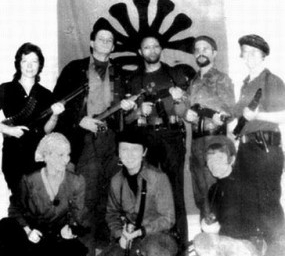 After 27 years of blissful anonymity, the Symbionese Liberation Army has finally been brought to justice. Last week, one revolutionary was sentenced to no less than 20 years and three more were arrested, all participants in a botched bank robbery in Sacramento back in the seventies. During the interregnum they successfully blended in with the society they had previously tried to overthrow. And blend in they did. When law enforcement finally caught up with them they found suburban, middle-class family folks, all driving nice cars, employed, and with healthy, well-adjusted children. Their bloodthirsty, revolutionary zeal for attacking the Establishment had been gently, almost seamlessly, replaced with the American dream.

But really, are they any different than their less radical Baby Boom cohorts? For the SLA and the Boomers, the deal was probably sealed during the Reagan years. Remember when the Beatles’ “Revolution” became a Nike ad campaign? Those days of Dynasty and BMWs, suspenders and neo-nuclear familialism, “Just Say No” and powder and rock cocaine, signaled the triumph of blending in and being part of the Establishment. Timothy Leary’s “Tune In, Turn On and Drop Out” easily evolved into “Buy In, Blend In and Sell Out.” At least that is what we—the “Tweener Generation”—saw in those dark days of the late seventies and early eighties. Sandwiched in between the Boomers and their kids, we came of age during Carter’s Malaise and Reaganomics. We had something to be desperate about—no jobs, nuclear holocaust, “stagflation”—and something to rebel against—Bonzo’s Republican Banana boat and a renewed, frightening arms race. Armed with punk music, crazy, gender-unspecific wardrobes and colorful hair, some of us reveled in the opportunity to rebel, to be different and to shake our fists at the Establishment.

We rebelled, and we quickly became cynical. Rebellions are usually hopeful, built on the idea that things can get better—like those pipe dreams that fueled the idealists of the sixties. But we were nursed on a diet of negativity—Watergate, the fallout of Vietnam, oil embargoes. When we finally got into high school and college we had our own scandals—Iran-Contra, the Savings and Loan Scandal. And we mulled over a new set of heavy issues—stopping a seemingly inevitable nuclear war, properly identifying “freedom fighters” as death squads and trying to put a plug in trickle down economics. We had class warfare and little faith in the powers that be. But, by the nineties, we started to blend in and buy into the dreamy American ideal.

Maybe it is because they just don’t make scandals like they used to—sex, lies and influence peddling are the norm now. Have you heard that politicians have sex with interns and give special access to big campaign donors? How shocking! The 2000 election had the hue of real crisis, but that faded like an old concert t-shirt.

The constitutional crises that buoyed our cynicism and revved our rebellion are things of the past. Although the media would have you think otherwise, the real scandal is that we really don’t care about this stuff very much, and that we rarely look beyond these meaningless stories to truly criticize the inner workings of our government. Fortunately, the youngsters of today—even after the events of 9-11—live in a much safer, far more prosperous America. So, perhaps their time is better spent planning their 401ks and retirement dreams, rather than shouting to the top with ebullient American cynicism.

Even when today’s “young turks” do get organized, it just doesn’t have the same gravitas of the “good ol’ days.” Wasn’t it hard to take those anti-globalization protests seriously? Middle and upper middle class kids pissed off about McDonald’s on the march and low wages in Malaysia—it just doesn’t play. Perhaps the history of protest is scarred by the compromised radicalism of the past. Isn’t rebellion just a way station on the road to profitability?

And it is so hard to rebel nowadays – just listen to the music. Rappers spend most of their energies celebrating their wealth, sexual prowess and fame. So-called alternative rock is a mélange of touchy-feely neo-masculinity, spiritual yearning and catchy compromises. You can’t really shock with your appearance, either. Guys with pierced ears have given way to human pin cushions, and in post-Grunge America tattered clothes just seem stylish. And with a Starbuck’s and the Gap on every corner their fashion sense need not keep them from getting jobs. It’s a far different America from the one long-haired hippies or mohawked punks once faced.

All of this nostalgia for yesteryear highlights the real problem—that we, those punks and rebels of the past, are beginning the time honored journey into mediocrity that has drawn in so many before us. Until recently, it has been easy to romanticize about those heady days when we cranked up the Clash, daringly cut and colored our hair, and slam danced to show off our anti-social credentials. But now the Buzzcocks and the Ramones are used to sell SUVs, and we have to radically reconsider the coming years and the mythos of the past. Are we, too, about to enter into the pantheon of wrung-out rebels? Although we never took hostages, robbed banks or wreaked the violent havoc of the SLA, there is some part of their story that makes our own passing seem inevitable.

'Rebel, Rebel… You’re Facing a Mess' has no comments