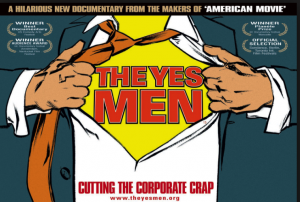 The Yes Men. If you don’t know about their antics–posing as a WTO technocrat and appearing on TV or at economic confabs to speak with the true voice of international free trade–you’re missing something special. The simply titled DVD documentary-The Yes Men-is not some Leni Riefenstahl groundbreaker, or some Michael Moore indulgence It’s a simply-filmed look at a small group of guys who set out to use intellectual jujitsu on the free trade community.

It works, both as a film and as a method of poking back at the powers that be. Go to Netflix now and pop it into your queue.

We live in a matrix of absurdity. Saying one thing, doing another. Denial of obvious truths, of history and of the price others pay for our luxurious lifestyles…these things have made us into a neo-colonial globalization gorilla, 800 pounds and armed to the teeth. How do you fight off that ape when unenlightened self-interest is the apex, when the bargains are so good and the widgets so disposable? The cost of all that “wealth” has been “off-shored” to far and brown-skinned lands, or yellow-skinned lands. We don’t see the working poverty, visible pollution or squalid lifestyles that cluster like flies around the factories. We see clean, plastic products in Wal-Marts and Costcos. It’s so much cleaner here. Isn’t that nice?

Well, the Yes Men have found a way. They use the WTO’s words and ideas–unvarnished with the attendant spin–to reflect back at them their true image. They dress up like the 800-pound gorilla and dance around, singing and yelling . The gorillas don’t really get it, but the Yes Men give the rest of us a frame of reference by which we can see the gorillas for who they are.

And they are funny. Really funny. Just pray that you don’t get a “Re-Burger” next time you go to Mickey D’s!

The arguments for “free trade” are intellectual “Re-Burgers,” tired and recycled. They get associated with freedom while the actual policies strip it away. They are thought to lift all boats, when they actually monopolize the shipping lanes for the biggest oceanliners. The conitive dissonace is intense, the absurdity almost comical. Absurdity is best fought with absurdity, with satire and biting humour. Just say “yes” to The Yes Men…it is absurdly funny.

'Just Say Yes' has no comments