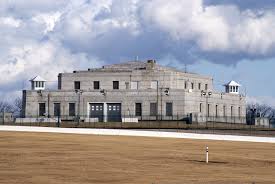 Fort Knox…a world-famous repository of America’s gold reserves. A bounty of bullion. One stop shopping for the Goldfingers of the world…should they dare to breach it’s defenses.

And then there is the White House. A fortress of opportunities for no-bid contracts, taxpayer-funded projects and for the defense industry. Whether they start wars, or simply respond to natural disasters, or they coordinate with an Enron-engineered energy crisis or cavort with corrupt Hill-dwellers like DeLay or Frist…this White House sees a world of profit in others’ losses.

The two Gulfs…here and in the Middle East…are each in a sea of no-bid contracts. Halliburton. Hello, people…Goddamn Halliburton! They parlayed Iraqi Oil for Food contracts, and contracts with Libya and Iran, into a post-9/11 flood of taxpayer dollars. They built Gitmo. The rebuild things we’d blown up over the last decade. The longer troops are in Iraq, the more money they make. And we ain’t talking chump change. In fact, Halliburton was on the verge of bankruptcy before Cheney left it to be VP. Now, it’s stock is through the roof…profits are high. Hello…is anybody getting this?

So, Joe Allbaugh…formerly of the Bush 2000 campaign, formerly of FEMA, lobbyist for companies flooding into Iraq after the invasion…was down in our Gulf snatching up no-bids for his crony clients…like Halliburton.

Not that the oil companies…who keep posting record profits since we went into Iraq…would exploit this situation. Well, they are. And Bush, shamelessly or wisely–depending on just how stupid we are–has called for the Congress to help build more refineries. What?! Now, we have to pay to help the oil industry build more refineries? What happened to capitalism? To free markets? President Gas sees the opportunity. People are scared about fuel. The oil companies can get us to pay for their infrastructure. And guess who builds oil infrastructure? Halliburton!!

Helloo…hellooo…helloooo…is there anybody out there?

California got caught in this kinda opportunism. Enron, El Paso and others created the bogus California Energy Crisis. It’s true. You think not? Get over it. Do some reading.

Cheney’s Commission met with Enron, Lay was a huge contributor to the Bush campaign…they are like two Bangkok whores putting on a show for a millionaire. Enron profited…and the execs off-shored the money before the collapse. The Administration used the crisis to sell it’s energy policy. And California built a bunch of new energy plants and infrastructure…at great cost to taxpayers. Guess what. California has a huge amount of OVER CAPACITY! Idle plants, unused power lines. Because there wouldn’t have been a crisis without the intentional screwing of the market. There was no real shortage. Just an opportunity to make one.

Oh yeah, that Energy Commission was poring over oil maps of Iraq…the summer before 9/11. It’s true, look it up. All that oil, all that infrastructure to build, all those troops to supply and bases to construct. Iraq had nothing to do with 9/11. But what an opportunity!

All that glitters isn’t gold. Sometimes, you just have to follow the gleam of blinding White light that comes from the heart of the WoB. In that fortress of liquidity, that central bank of possibilities…you’ll find the opportunities come…by hook, by crook or by natural disaster.

Oh, am I talking to myself again?

'Opportunity Knox' has no comments