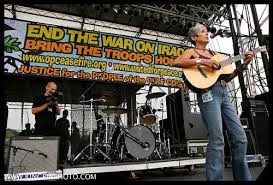 Festive, determined and unabashed. That’s the way it was backstage at Operation Ceasefire. It was a progressive starf’cker’s dream…Laura Flanders and Amy Goodman, Steve Earle and Joan Baez…but Laura has the best eyes. And that voice. Perchance to dream….

The backstage view showed the strength and commitment of those who oppose the continuing war in Iraq and the teflon-coated presidency that organized it. There was an undercurrent of outrage, but mostly it was celebratory. The crowd…the 150,000-plus who marched and those who moseyed over to the concert…was filled with righteous indignation, but there was also a palpable sense of arrival in the air, in the chants and on their signs. The best of which read: “Bush pull out, just like your father should have.”

The jubilation was not ironic, nor was it inappropriate. Like it or not, Katrina has made it okay to think that things are going wrong. It’s okay to gather in public and chant. It’s okay to actually know a few facts and express them. Joan Baez dancing backstage, some two hours after she performed, was a moment of joy expressed quite fetchingly by someone who realized that the time had arrived. Anti-war didn’t not, ipso facto, have to be anti-American. About 300 showed up for the “counter-protest.” Wow!

Of course, I didn’t see any mainstream reporters in the media tent…except one local DC guy for WJLA. Bully for them.

Still, the mainstream didn’t take the time to ask the many recognizable faces who came through the tent for an interview. None were there for post-game interview after Cindy Sheehan’s triumphant participation on stage and her completely accessible stop in the media tent. Although the media has surfed on the wake of Katrina, they still avoid the whole “Iraq is a mess, in a civil war and people are dying” thing. And let’s not mention the female-unfriendly Iraqi constitution.

You see, there are people in the anti-war movement who kinda resent Cindy’s celebrity. They hate that there are dozens, perhaps hundreds, of other families with similar stories who are ignored. Many have fought the good fight to break through the media barrier to tell the truth about what’s going on…without much attention or success. Understandable.

They hate that the media has a short attention span and focuses on celebrity-types. True enough.

But this is how it works, my friends. I know. I’ve seen it from the inside out. Take what Cindy is offering and run with it. It’s why the numbers where so high on Saturday. It’s why she got such a huge welcome on stage, and was mobbed in the march. A plain, American mom…standing up to a propaganda machine that, speaking as an expert on fascism, is as effective as those of the 1930s. All she needs to do is throw some apple pie at the White House…what could be more American than that?

So, it’s great that the music brought out the best in people, that Steve Earle and Joan Baez stirred the soul and the others rocked the crowd on. But it was Cindy who mentioned the flaws in the Iraq constitution. In that way, she surpassed our media, our journalists and our leadership. She passed the test like a pro. Don’t look this all-American gift horse in the mouth. She’s the real deal.

'Passing the Protest' has no comments