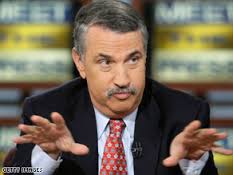 We went soft. That’s the current media sensation. Thomas Friedman, globalization hack and all-around do-nothing new, wrote this week that 9-11 “distorted the political environment.” It led to reticence to question the Admin’s policies.

A couple days ago I heard a major news weekly editor admit that he went soft on Team W after 9-11. Revelatory, isn’t it?

According to Friedman, David Brooks and others, Katrina has changed the political calculus and it’s suddenly okay to go after Bush…particularly on spending. See, now that we are into it all to the tune of hundreds of billions of dollars, with half of all our borrowing coming from banks in China, South Korea and Japan, Katrina opened the door to criticism of the policies that got us here. Thanks, Katrina!

No thanks, media whores.

It’s a classic, yet weak, mea culpa. We should. We coulda. But you didn’t. You didn’t question anything after those towers dropped. But now, hey, with all that mess down there in our Gulf, we can finally head into the breach and show that we are still journalists. Forget the flag waving, and the forgotten Anthrax investigation. Ignore the parroting of the Admin’s WMD claims, and those “ignorant” sources who said that the intelligence was faulty…in the intelligence community. Porter Goss pushed ‘em out anyway. They aren’t sources anymore. No need to grovel for access there.

It goes on and on. And they were soft before the 9-11. CBS buried Greg Palast’s Florida 2000 story…which ran on the BBC. The media did little on the Energy Commission. They had the National Guard story back in 2000…I know…I put it into a major anchor’s briefing book. He never asked Bush the question.

So, maybe Friedman is partially right…a particular talent of his…that 9-11 further distorted the already mutilated approach to the Bushes. Read Secrecy and Privilege by Robert Parry, or Kitty Kelly’s The Family. And wonder why Kitty Kelly…who could expose the iconic Reagans for consulting an astrologer, but couldn’t get one appearance on Larry King. She was cancelled by the Today Show the night before her scheduled appearance. It’s a long-standing pattern.

Anderson Cooper’s Katrina-driven outrage over the outrageous, Friedman’s dispensation to finally expose the fiscal and foreign policy failures of the Admin…they make up for nothing. AWOL is AWOL. They’ve blown it. Just look at the way the alternative media has dealt with this Admin. It’s all been out there for anyone who cared to look. All the information, all the investigations…on the internet, and radio and voluminous books…some of us have seen this coming for the last four-plus years.

So, caught with it’s pants down, ironically while they failed to report that the emperor had no clothes, the media is trying to pre-empt the revelation that they were scooped.

They missed the story.

No, it was an act of God…Katrina…that made it okay to take the gloves off. Leave it to the media to turn Katrina into a rationalization for there collective failure. Theya culpa alright…too little, too late. Just like the Admin’s response to Katrina.

'Wea Culpa' has no comments