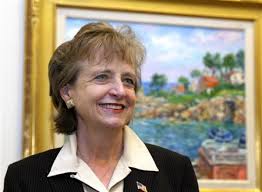 Listen up, Republicans. Harriet Miers is a gift. Here’s why.

The 2006 Elections are looming and conservatives are in trouble. Some are downright scared, others angry. The five-year spending spree finally registered with all those heretofore small government hypocrites. The Sharia law-friendly constitution, the details of which are ignored by cha-chinging media whores, inspires nothing short of outrage from Crusading Christians. Katrina and Brownie, Delay and Frist, Rove and Libby…incompetence, corruption and cronyism now have identifiable names. Well, at least people are finally naming names…something that could’ve started years ago. Alas…too busy being scared and patriotic.

Now, gas prices, housing market jitters and Bush’s poll-rating free fall…the stage is set for an axiomatic anti-incumbent mood. Representatives and Senators face an off-year election coated with the tarnish of licking and polishing W’s boots since 1999, supporting an increasingly unsupported war and forced to defend their lock-step approach to obviously incompetent marching orders. Will voters take out their wrath on his party regulars?

And then along comes Harriet. Michael Brown as a Supreme Court nominee. A Bush hack. A crony. A living, breathing slap in the face to all those religious conservatives who wanted to put the icing on their Supreme Court cake, top their Justice Sundae with an intellectual cherry. Criticism abounds, nerves quake. Senator Harry Reid slyly endorses her.

Here’s the GOP’s chance to did something Bill Clinton did time and again with his Democrats. Triangulation.

Remember “the era of big government is over, ” the welfare reform legislation, balanced budgets…all those co-opted initiatives that kept him from being lumped in with the Congress?

Triangulation. He staked out positions that would separate him from his supporters while retaining support, and from his detractors while absorbing parts of their message…effectively triangulated away from both side of the debate. Some Dems tried to do the same thing to Bill during BlowjobGate.

Smart Republicans…no, that’s not an oxymoron…will use this nominee to distance themselves from their President. Start talking about cronyism, about flawed decision-making, about betrayed trust. It’s a pattern, one that is now clearly taking the country in the wrong direction. Go for it, particularly if Karl gets indicted. Sure, he could be like so many incarcerated Mafia Dons sent to prison, calling the shots form his cell. But he won’t go to jail–he’d be pardoned–and he will be chastened. At least, he’ll be restricted.

Go after spies in the Vice President’s office, and AIPAC spies in the Pentagon. Triangulate on Iraq by pointing to the joke that is the constitution and upcoming vote. Stake out a position away from politics-playing Democrats while using some of their plaintive pleas for sanity in the face of exorbitant no-bid contracts, half-ass plans for Middle East democracy and seize upon the bitter irony that President Gas and all-around Saudi pissboy can’t pressure oil companies to take in a few billion less in profits. Get populistic.

Christians and evangelicals can stop being used by economic conservatives as their pro-life puppets. Make your case to your base. Tell your zealots that you’ve been betrayed by a false prophet. No, not based on the amazing idea that God, the “thou shall not kill” father of “love your enemy Jesus” would command W to kill thousands of innocent people in Iraq–that’s going too far. No, just tell them that you had faith in this President and this moment and that he blew it. So many are already saying it.

Pile on. Triangulate. Don’t look this gift horse in the mouth. Harriet is really there because of her history of protecting business and Bush from the law. Not because she’s Jay Sekulow in a skirt.

W’s opened the door, walk through it.

You’ll save your ass in the upcoming election.

'A Trojan Gift Horse' has no comments