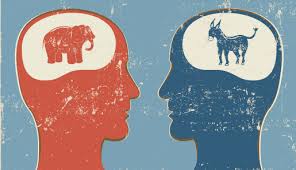 American journalism and the media engage in continual effort to “balance” stories, to show both sides…to keep everyone happy. “Ping-Pong Journalism,” is what a good friend calls it. I saw it daily when I worked at the “most respected hour of news.” Mr. Ping says “X,” now to you Mr. Pong. Oh, you say “Y.” And that’s the way it is. X versus Y. We really can’t factor out the equation to get an answer. Answers are too political, too subjective. In fact, there are no objective truths, anymore. Isn’t that nice and balanced?

What scares many media whores is the idea that they’d be tarred and feathered with the “liberal” epithet. Liberal Media, Liberal Elites…out of step with America, somehow Un-American and obviously unfair.

Of course, you rarely hear the words Conservative Media or Conservative Elites. They are there, though. Corporations are, by and large, conservative…both in style and temperament. They are bottom line thinkers. They want to stay off the radar screen, keep taxes low and policies “sound.” Their country-club and boardroom agendas get little play in the media. That’s where the conservative bias is felt most.

Take GE, for instance. Our media changed radically after GE bought NBC in the early 80s. GE makes a number of profitable defense products, aircraft engines for military planes and nuclear weaponry stuff. How would those at the top feel about liberal, anti-war, anti-defense spending, anti-nuke reporting? Reporting that might alter the bottom line? GE made a lot of money off the Reagan build-up in the 80s. And they still do…off this little money-maker in Iraq.

Then think about all the big media conglomerates. Basically, five corporations own all the media in this country. Do you think their boards are filled with liberals? Add Fox into the mix…and if you don’t think they are conservative, well…you’re an idiot. They are. They’ve been caught getting talking points from the White House. Fox’s head cheese, Roger Ailes, was a GOP political fixer and operative. And they’ve been setting the news media agenda since the end of BlowJobgate. They single-handedly moved the news media away from reporting, taped stories and news-gathering around the world to talking heads and pundits arguing over stories. “We yell, you decide.” Facts are not facts, but debate topics.

Fox reporters don’t actually break news. The eat it off the wires, vomit it out onto the screen in cute stand ups…and then the debate dogs come out and eat it up again. They, in turn, regurgitate it once more via satellite, mixed this final time with their bile…so you can have a taste.

Post-9/11, the conservative trend was solidified by flags waving, fear of being labeled unpatriotic and by a genuine sense of “we’re all in this together.” Facts gave way to jingoism and supporting our Commander-in-Chief. In the talking head dominated lead up to the Iraq war, anti-war critics were outnumbered across the media by former generals, pro-war advocates and think tank shills to the tune of 800 to 6.

Really, someone counted ’em all up. Only 6 criticized the planning and machinations leading up to, invasion of and occupation thereafter of Iraq.

What happened to that “liberal media” we’ve been hearing about for so damn long?

Enter Katrina and Miers and Rove and Libby and Abramoff and Iraq…and on and on. And we’re hearing about that liberal media again…those people who are out to get Bush, who jump on every little story to undermine him and destroy his presidency. They are politically motivated.

But where were they over the last five years when all this was developing?

It’s only because of Katrina that they finally feel safe reporting facts.

Rove leaked the name to Matthew Cooper of Time. Fact.
Delay and his corruption-laden buddy Abramoff have been indicted. Fact.
Frist pre-emptively sells stock in the family business–HCA–which is also under investigation for Medicare fraud. Facts.
Iraq in civil war. Fact.
Halliburton profiteering off Gitmo, Iraq and the Gulf States. Facts.
The right upset about Miers. Fact.
The facts keep coming.

Just like Bill shooting his wad on the blue dress. Another fact. No dispute there. I doubt his sperm declared a party affiliation upon exiting his urethra…the ejaculation was not political.
Bill lied about sex. Fact.

There is no counter-point to Rove leaking. He did. It’s not liberal to point it out. You can’t balance that fact with someone spinning it. “Balance” would be someone having proof that it is not a fact. Everything else is propaganda.

Nor is it liberal to point out any number of criminal acts that are unraveling before our eyes. It’s not liberal to call Iraq what it so obviously is…a civil war. A war between competing domestic interests is a civil war. Iraq Sunnis versus Iraqi Shiites equals civil war. That’s not liberal, unless Webster’s is a leftist dictionary.

You see, the Whore of Babylon’s greatest tool, surest instrument of power, is to insert into all things–you and me included–the idea that there is no real truth, that everything is political. Even facts. We hear how politicized America is. We’re now so totally divided. The critical thinking skills and judgment of the American people supplanted by the idea, cultivated to full bloom during BlowJobgate, that everyone is motivated by political desires, ideologies and agendas. Of course we are divided, no one can agree on facts anymore.

You are either right or left, liberal or conservative. All reporters, media and politicians, newspapers and radio–all one or the other. Many are. Some are not. But the real issue is that we’ve moved into a post-journalism democracy, we’ve seen the rise of Ping-Pong Journalism and the end of “facts” as an end, in and of themselves. Facts are now only a means. Along with it, justice has become passe–it’s a means to an end. The same with law.

Everything is relative. Everything a political tool.

But once upon a time, whether it was Watergate or Iran-Contra, facts mattered. There may have been some deep politics going on. Yet, the whole country saw crimes. Saw laws being broken and justice offended. The facts ruled above all else. Reporters chased them down. They reported facts. They did not debate the existence of facts. They did not make their careers off of opinioneering.

Balancing out facts. You can, but the counterpoint to facts are lies, falsehoods and erroneous findings. I guess that’s what the media’s been doing. Balancing out the facts.

'Are Facts Liberal?' has no comments