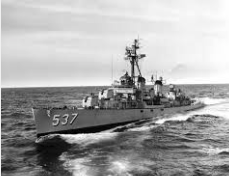 Those of you who think the last century proves humanity to be a stinking gene-pool of war and violence, that we’re warlike, trigger-happy beasts itching for carnage…take heart! It may not be so. I advocate studying history…the history of the 20th Century’s wars and our current adventure in Iraq. That is, if you can find the history, the facts and the story of the machinations that generate conflicts.

If you rely on the National Security Agency to come clean about such things, you might be disappointed. This week it was revealed that the NSA blocked an NSA historian from releasing key information about the Gulf of Tonkin Incident and the “comedy of errors” that convinced Congress and the American people to follow LBJ into that tragic, if profitable, war in Indochina. Of course, this important story faded quicker than an Anthrax investigation, and the “trusty NY Times” buried the lead. But, now you know.Why, you might ask, would the NSA be concerned with covering up this “ancient history”? It’s axiomatic that Americans care little about the past, know little of our own history and, sporting the attention span of a gnat, move onto the next celebrity scandal du jour with simple ease. Or the ease of a simpleton.What danger is there in letting out a bit more evidence that the Gulf on Tonkin was mere pretext for a foregone conclusion…the war in Vietnam?

What danger is there in letting out a bit more evidence that the Gulf on Tonkin was mere pretext for a foregone conclusion…the war in Vietnam?

Get it? Whether one looks at the Downing Street Memo, or the Project for a New American Century. Or the Cheney Energy Commission. Or, back in 2002, Andrew Card talking about “not rolling out a new product in August,” when asked why they waited until September to make the case for the invasion of Iraq. Or, after month after month after month of ignoring it, what is finally all over the media…the falsified, jury-rigged intelligence about WMD in Iraq. What you’ll see is that this current war was a product, a scheme…a long-hatched plan to make it happen, regardless of any threat posed by Saddam or the findings of the UN. It was manufactured, like any other product sold to American consumers.

The problem the NSA astutely identified was that the Gulf of Tonkin offers a sort of blueprint for a war case based on lies or faulty evidence (you’ll have to decide that for yourself) and the war lust of those entrusted by the military-industrial complex to create new markets for their products. Or those seeking natural resources to sell back to us. Or both. It gives a whole new meaning to the phrase “market forces.” The White House even had a group–the White House Iraq Group–designed to sell the war to us all.

The NSA’s desire to stop the release of their own historian’s findings–which really take the soft interpretation of the Tonkin Incident as more folly than foul play–illustrates the overarching control of information that this Administration relies on to steer clear of culpability, and to steer us as they see fit.

If we do, if we truly examine some of the forces that lead to wars, we will find a pattern. Since the beginning of the 20th Century, wars have–by and large–been manufactured. We are basically agreed about the Manchurian Incident in China (1932), the Nazi invasion of Poland and there is a troubling consensus emerging around Pearl Harbor. The Burning of the Reichstag was damn fishy, wasn’t it? Jury still out on the true source of that one. The Nazi sure made out on that deal, didn’t they?

There is, of course, the Spanish-American War. Yes, late 19th Century…but “Remember the Maine?!” Oh yeah, historians agree…it wasn’t bombed by Spanish/Cuban enemies. Shall I go on? There are a dozen little hot wars during the Cold War that have flakey causes.

Then, we goaded Saddam into attacking Iran…after arming him and secretly arming Iran. A two-fer! We goaded Saddam into invading Kuwait…practically invited him…thanks to April Glaspie and the illegal arming of Iraq by Bush the First. Then came the Gulf War and false claims of Iraq troops massing on the Saudi border, babies being unplugged by incubators and a litany of “Saddam is the Son of Hitler” articles by…drum-roll please…Judith Miller!

There is secrecy to penetrate. And there are lessons to be learned by studying not only the facts of history, but the motivations for secrecy. The motivations, for instance, around Bush the Second clamping down on the release of records from Reagan-Bush, Bush-Quayle and even from Clinton-Gore. Iran-Contra still has untold stories…at least untold by mainstream media. Keeping a lid on new records, or historical findings…keeps us in that axiomatically American place–a collective ignorance of history. It keeps the “them” in power. It obfuscates patterns to all but the most tenacious, perhaps even paranoid, of researchers. It keeps the media from revisitng the past.

But why not be paranoid? We see over and over again that “they” are trying to hide something.

I’ll keep reverse engineering. I have to. It’s my heartily-embraced lot in life. It sustains my idealism about mankind to know that we have to be guided into wars by special interests, by interested parties, by war-profiteers and by inhuman leaders.